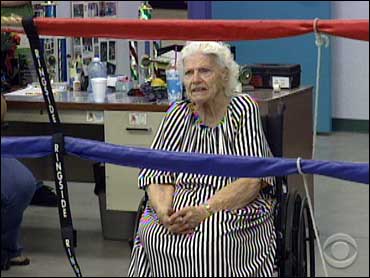 When you're 85 and riddled with arthritis, just moving the coffee pot from here to there can be an exhausting experience.

"I'm going to have to sit down for a minute," said 85-year-old Thelma Tavares.

But make no mistake. She's tough.

Her name is Thelma Tavares and her game is boxing. That's right - boxing. Never mind that it takes her the entire Rocky theme just to get to her car.

Once at the gym - Thelma lets it rip - relentlessly pounding on everyone.

For the last nine years, Thelma has been in charge of the boxing program at the Boys and Girls club of Reno, Nevada. Ruling the ring - in her referee-striped muumuu.

"She has us run, like she has a lot of discipline on us," one of her athletes said. "Some of the kids don't want to listen to her but they have to - like they have to look up to her."

Why do they have to?

"Because she's Thelma," he said.

"Does she know anything about boxing?" Hartman asked the student. "Yea, she knows a lot."

Thelma was never a boxer herself. Which, of course, begs the question: how did she learn so much? And how did she end up here?

The answer goes back nearly 50 years. Thelma's husband Ray was the real boxing nut. He coached his entire adult life and Thelma helped - signing in kids for tournaments and just being there for him.

"He never was here without me and I learned from him," Thelma said. "And somehow I feel like he's still in our corner."

When Ray died in '99 - Thelma stood at his casket and promised to keep the boxing club alive.

"Best promise I ever made in my life and one that I was allowed to keep," she said.

That's why, even at 85, Thelma has no plans to retire. Plus, she says working with the kids has been good for her arthritis - and has even softened some of those hard edges.