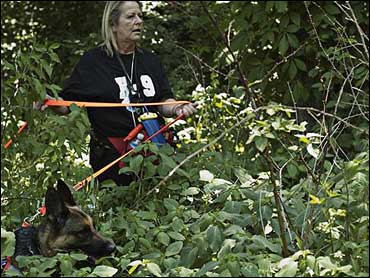 A baby found on an Ohio doorstep does not belong to a missing pregnant woman, Wayne County Sheriff Thomas Maurer said Friday.

The baby was left outside a home about 45 miles from where Jessie Davis lived. A woman admitted leaving the newborn on the doorstep, Wayne County Sheriff Thomas Maurer said.

"This incident is not related to the ongoing investigation by the Stark County Sheriff's Office in the disappearance of Jessie Davis," Maurer said in a news release.

Davis, 26 and nine months pregnant, was reported missing one week ago Friday after her mother found the young woman's bedroom in disarray, the furniture overturned and Davis' young son home alone.

Meanwhile, Davis' mother said Friday she's angry at whoever abducted her daughter. But Patti Porter is also grateful to the large number of people who've helped search for Jessie.

The community turned out in big numbers again Friday, reports CBS News correspondent Teri Okita, but not as big as Thursday: Only 250 volunteers were out Friday, down from more than 1,800 the day before.

Davis' sister, Whitney, said the family was not participating in Friday's search.

"It's too stressful every time a dog comes across something," she said.

"I still pray that it's not him," she said. "That doesn't mean that I don't think he's a suspect as well."

Authorities have talked with and searched the home of the father, Canton police officer Bobby Cutts Jr., although investigators have repeatedly said Cutts is not a suspect.

Porter reported her daughter missing one week ago Friday after finding the young woman's home in shambles, the furniture overturned and Davis' young son home alone. The 2-year-old boy, who may be the only witness to his mother's disappearance, told investigators: "Mommy was crying. Mommy broke the table. Mommy's in rug."

When Porter was asked Friday by NBC's "Today" show if she considered Cutts a suspect, she replied: "Yes, he's a suspect."

"In most cases of violence, people are victimized by people they know. Especially when we talk about violence on women, more violence is perpetrated by those with whom they have an intimate relationship than a stranger," McCrary said on CBS News' The Early Show Friday.

Cutts, 30, has said he had nothing to do with Davis' disappearance. The woman's family says he is the father of both 2-year-old Blake and of Davis' unborn baby.

On Friday, volunteers lined up for a second day to help search surrounding fields and woods for any sign of Davis. More than 1,800 volunteers had turned up Thursday to scour backyards, vacant fields and a Christmas tree farm, before rain cut the search short.

"I've got my walking cane, first aid kit," she said.

Porter said Friday that young Blake was keeping everyone motivated and reminding them every day of his mother, whom she described as her best friend, a woman without enemies who "always had a big smile on her face."

Blake "has periods where he just lays his head down on the couch and has this horrible look of sadness, and then the next moment he'll have this big, beautiful smile. He really is what keeps us going," she told ABC.

Volunteers searched the area around Davis' home for about 4½ hours on Thursday until they were stopped by heavy rain. Groups of 80 to 100 searchers covered a total area of about eight square miles, said Tim Miller, director of Texas EquuSearch, an internationally active search group that organized the volunteer effort.

"I'm hopeful we can find her alive," he said. "If not, the second-best thing we can do is be back here next week for a funeral."

EquuSearch dispatched the volunteers Friday in groups of 50, while the American Red Cross was providing food and water for the searchers, reports the Cleveland Plain Dealer.

"People are calling, crying because they can't take off work," Porter told the newspaper.

Helicopters, a drone plane, and sonar equipment are also helping in the search, reports Okita.

"That's kind of what's motivating me to be out here," she said.

One woman wore high heels but gave up 20 minutes later after walking through a wooded area. Another maneuvered on crutches. "I'm here for the whole thing," said Tammy Robinson, 47.

At Davis' home, several bouquets of flowers had been left outside.

On Wednesday, sheriff's investigators and FBI agents carried out more than a dozen white cardboard boxes, a few brown bags and three large black plastic bags during a search of Cutts' home.

His mother, Renee Horne, told The (Canton) Repository that agents were looking for Davis' cell phone and a quilt missing from her home. She said FBI agents questioned her son twice Wednesday, and read him his Miranda rights during the second interview.