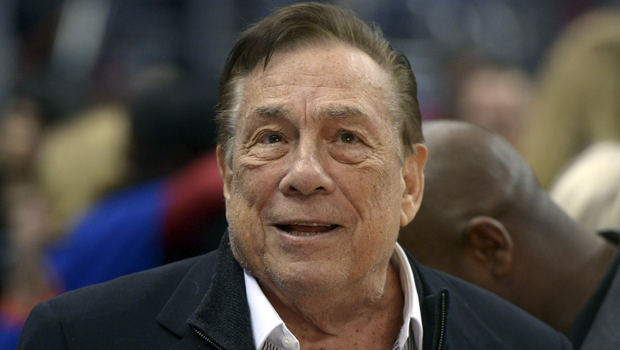 LOS ANGELES - In his first public comments since being banned for life from the NBA, Los Angeles Clippers owner Donald Sterling apologized for racist comments captured on tape, saying they were a "terrible mistake" but that he was "baited" into making them.

In the interview taped Sunday and set to air Monday with CNN's Anderson Cooper, Sterling said he is "not a racist."

He said he loves the league, his partners and believes he's "entitled to one mistake" after more than three decades as an owner.
On the court Sunday, the Clippers rallied to beat the Oklahoma City Thunder 101-99, knotting their Western Conference semifinal playoff series at two games apiece.

The interview came nearly two weeks after NBA Commissioner Adam Silver banned Sterling for his comments, fined him $2.5 million and urged the other league owners to force him to sell the team.

Sterling told Cooper he waited to make a public apology because he was "emotionally distraught" and he didn't know how to correct his mistake.

He also said he felt he was set up by V. Stiviano, the woman to whom he was speaking in the taped conversation.

"When I listen to that tape, I don't even know how I can say word like that," Sterling said. "I don't know why the girl had me say those things."

On the leaked recording, Sterling can be heard chastising Stiviano for posting social media pictures with Los Angeles Lakers legend Magic Johnson. Asked by Cooper about his comments about the NBA Hall of Famer, Sterling said, "If I said anything wrong, I'm sorry."

"Has he done everything he can do to help minorities? I don't think so," Sterling said. "But I'll say it, he's great. But I don't think he's a good example for the children of Los Angeles."

Meanwhile, Sterling's estranged wife said she she will fight any attempt to take away her stake in the Los Angeles Clippers and that she will "eventually" get a divorce.

In an interview with ABC News' Barbara Walters, Shelly Sterling said she doesn't see why she should have to pay for her husband's remarks.

"I was shocked by what he said. And -- well, I guess whatever their decision is -- we have to live with it," she said in the interview airing Sunday. "But I don't know why I should be punished for what his actions were."

She said she would oppose any attempt to take away her 50 percent share of the team.

"I will fight that decision," she told Walters, calling the Clippers her "passion" and "legacy to my family."

"I've been with the team for 33 years, through the good times and the bad times," she said.

"To be honest with you, I'm wondering if a wife of one of the owners, and there's 30 owners, did something like that, said those racial slurs, would they oust the husband? Or would they leave the husband in?" she said.

The NBA responded Sunday night that Shelly Sterling would have no right to hold on to her share of the team if the other owners voted to oust her husband.

"Under the NBA Constitution, if a controlling owner's interest is terminated by a 3/4 vote, all other team owners' interests are automatically terminated as well. It doesn't matter whether the owners are related as is the case here. These are the rules to which all NBA owners agreed to as a condition of owning their team," NBA spokesman Mike Bass said in a statement.

Shelly Sterling also told Walters she believes her 80-year-old husband is suffering from "the onset of dementia" and that she plans to divorce him - although not just yet.

"For the last 20 years, I've been seeing attorneys for a divorce," Shelly Sterling said. "I was going to file the petition. I signed the petition for a divorce. And it came (close) to almost being filed. And then, my financial adviser and my attorney said to me, 'Not now.'"

Shelly Sterling said she thinks her advisers told her to hold off for now because of "financial arrangements."

Shelly Sterling said that if her husband is forced to give up ownership of the team, she "would love him to" consider signing over full ownership to her.

Even if that is possible, it would unlikely to sit well with the team, according to Magic Johnson. The NBA legend, who was singled out in Donald Sterling's taped remarks, has said the players don't want to work for anyone named Sterling. Others expressed similar opinions after Shelly Sterling told the Los Angeles Times last week that she wants to hold onto the franchise. Broadcaster Ralph Lawler, the Clippers' longest-serving employee, told the paper that while her wish was understandable, others in the organization were ready to move on.

"I think in the eyes of the players and the coaching staff and the basketball staff, the page has been turned, and I think it would be difficult to turn it back," Lawler said.

Clippers coach Doc Rivers has said it would be a "very difficult situation" if Shelly Sterling ends up retaining ownership of the team.

"As players, we want what's right and we don't feel like no one in his family should be able to own the team," James said.