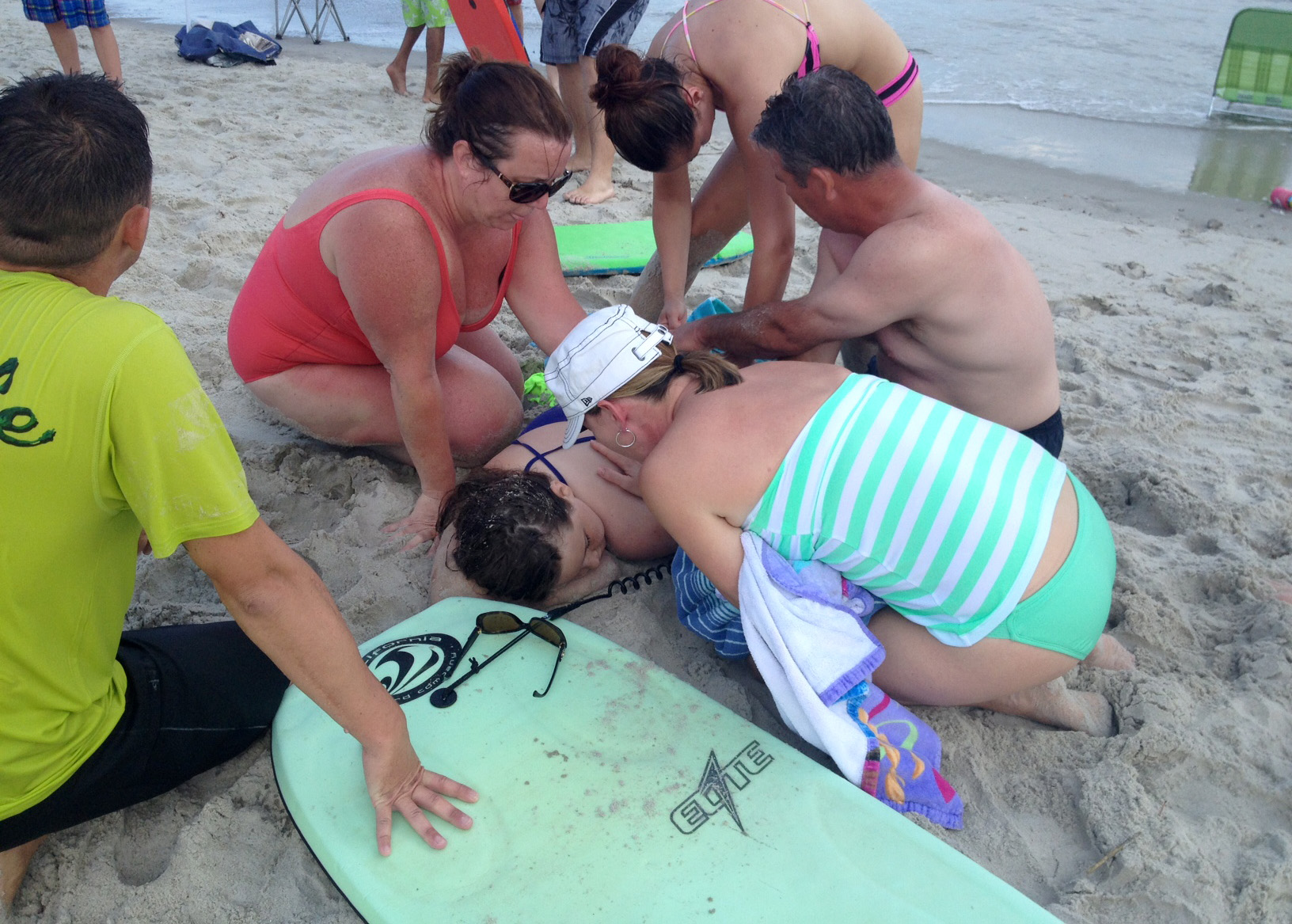 OAK ISLAND, N.C. - A North Carolina beach town is advising against ocean swimming after two youths were mauled by at least one shark over the weekend - but the beaches remain open.

A 12-year-old girl lost her left arm below the elbow and suffered a leg injury Sunday afternoon; then about an hour and 20 minutes later and 2 miles away, a shark bit off the left arm above the elbow of a 16-year-old boy. Both had been swimming about 20 yards offshore, in waist-deep water.

After the second shark attack, authorities drove along the beach on ATVs and shouted to warn people out of the water. But they acknowledged Monday that they didn't make a concerted effort to warn people before that.

Tim Holloman, town manager of Oak Island, one of two barrier islands off the North Carolina coast where the attacks happened, said the town has no ordinance authorizing officials to order the surf cleared even if sharks present a threat. And a state law guarantees public access to beaches.

Even on beaches with lifeguards "the standard is to clear the immediate area and warn people," said Chris Brewster, president of the U.S. Lifesaving Association. "It's up to people to make their own decisions."

Regardless of what authorities decided, most beachgoers Monday seemed to voluntarily stay out of the water - or at least remained in very shallow areas where they were less likely to encounter a shark.

"We're not going to go in as far," said Devin Dorian, 24, who was playing volleyball in the surf with friends from Slippery Rock University in Pennsylvania.

Holly Helmig, 39, of Raleigh watched her 6-year-old son bobbing on a boogie board in shin-deep water instead of splashing in the waves farther out. Her 5-year-old daughter Zoe shoveled sand in a bucket next to her.

"It's pretty obvious we're staying close to the shore," she said. "I talked to the kids about it before we came."

Deputies saw a 7-foot shark Sunday in an area between the two places where the attacks happened, Sheriff John Ingram said. Sharks of that size are common along the coast, Holloman said, and authorities are not trying to hunt one down. But safety officials scouted for sharks from boats and a helicopter Monday. One was spotted Monday morning, Holloman said.

Lise Watson, a shark expert at the Shedd Aquarium in Chicago, said there is a likelihood that the same animal was behind both attacks. The smell of fish blood in the water that's common around angling spots like a pier can excite a shark looking for a meal, she said.

"They also detect movement like the movement that a sick or weak fish would do by moving back and forth. That's one of the reasons we feel that kids splashing at the shore" attract a shark, Watson said.

Experts say the number of shark attacks is increasing because more people are entering the ocean every year while the number of attacks per capita has remained consistent. Precautions to avoid an attack include avoiding the water during darkness or twilight hours when sharks are most active, staying together since sharks tend to attack individuals, and staying away from piers where fish are drawn by bait.

There were only 72 unprovoked shark attacks on humans around the world in 2014, including 52 in the U.S., according to the International Shark Attack File at the Florida Museum of Natural History. Three of them - all outside the U.S. - were fatal. Shark researcher George Burgess, who oversees the database, said he's aware of only two other multiple shark attacks on the same beach in one day.

Sharks that do bite humans typically let go when they realize that they don't have a fish, he said.

"This by contrast, is an attack done by a larger shark that clearly goes after larger prey items," Burgess said.