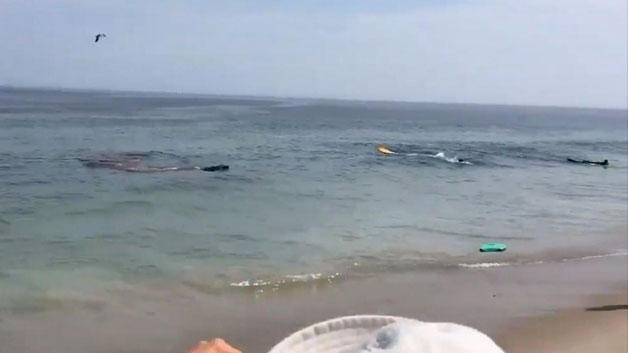 ORLEANS, Mass. – There was panic on a popular Cape Cod beach Monday after a shark attacked a seal just yards offshore. The shark took a fatal bite out of the seal just off Nauset Beach in Orleans.

CBS Boston reports there were nine shark sightings on the Cape Monday, all the way from Provincetown to Monomoy Island, but the scariest was certainly the one in Orleans, which shut down Nauset Beach just after 1:30.

"I looked up and saw the dorsal fin and the tail of what was a great white shark," said Thayer Wade, who shot video of the attack.

The video begins moments after the shark takes a big chunk out of the seal. It was hunting very close to shore.

"You didn't know if it was a seal or a human so it was kind of a heart stopping moment," Wade said.

Wade recorded the video just as panicky beachgoers scrambled to summon loved ones from the water — his uncle and nine-year-old cousin among them.

By that time, the gentle waves were filling with blood as the shark kept stalking the seal and moving toward the two teen surfers visiting from New York City.

"We were all yelling 'Swim! Swim! Shark swim!' but they didn't react at first," said Pat O'Brien.

When the teens finally realized the danger, one got his foot tangled in his surfboard cord during a panicky getaway.

"He reached up and he yelled 'Help me! Help me!' and I grabbed his right arm and another guy grabbed his left arm and we pulled him out," O'Brien said.

Everyone was out of the water by then, watching helplessly as the fatally injured seal struggled not wanting to come ashore to a crowd of people, yet not willing to venture deeper where the shark was waiting.

"It was a close call but thank God we're all safe," O'Brien said.

But many on Nauset Beach voiced the same fear among themselves — the fear that sometime soon, the victim along this busy shoreline won't be a seal.

"Definitely gives me a different perspective on a beach I've been to my whole life," Wade said. "I'll probably think twice about jumping in the water."

Shark sightings have closed a number of beaches on the Outer Cape over the past week.