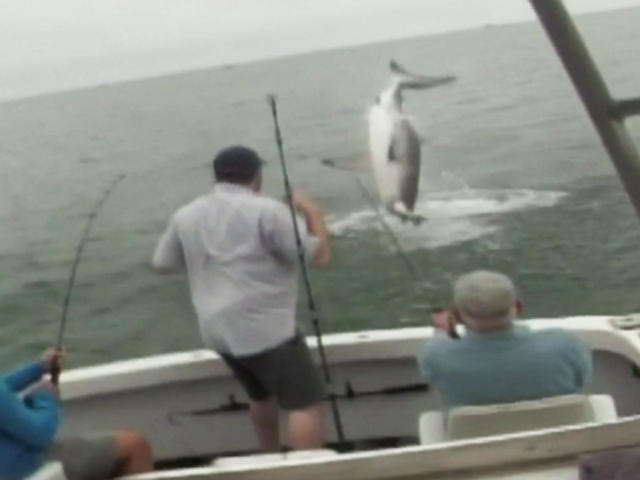 ORLEANS, Mass. -- A fisherman off the coast of Orleans tried to reel in a catch only to have it snapped off the line by a great white shark that jumped high out of the water. It happened in a split second, but the stunning moment was captured on video, reports CBS Boston.

"Six o'clock, when I turned the computer on and went to Facebook, here I am with 20 or 30 more people who want to be my friends, 50 some odd things on likes," said Captain Hap Farrell. "I'm going, 'What is this all about?"'

It was about his shark video. The Orleans fisherman had his camera rolling Saturday when a great white went airborne to make lunch out of his charter's catch,

"Remember, I've caught sharks before, so it was nothing special for me."

While the Internet buzzes over the incident, Hap Farrell says it was just another day along the Cape.

In all his years on the Stunmai II, Captain Hap has seen it all. For him, the biggest thrills aren't what's underwater, but who's on the boat with him.

"Watching the little kids catch fish. That's what I get excited about. I'll say, 'Leave them alone. That kid can catch his own fish.' And then here this little eight year old kid brings in a fish that's almost half as long as he is. And he did it by himself. You get such a kick out of that and it's well worth it. I'm sitting there wondering, 'You mean they're paying me to do this?"'

Even after 37 years, each day is a different adventure in who will climb on board, and what they'll see swim up beside them.

"It's funny about nature: If you don't play around with it or act scared of it or anything like that, you can pretty much get along with anything," Farrell said.