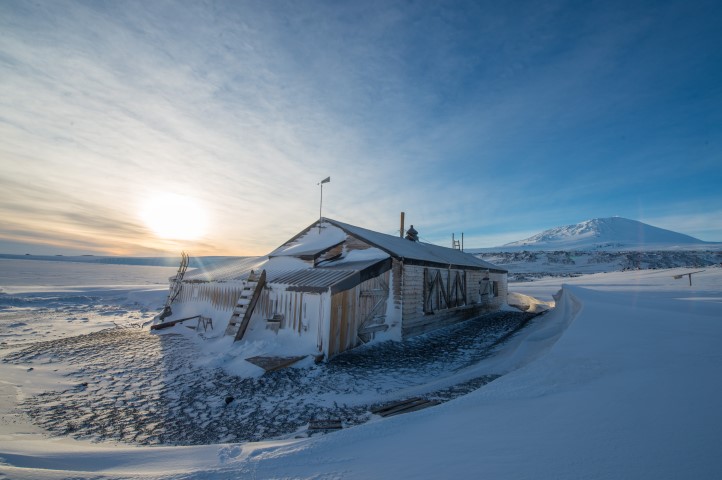 At the turn of the last century, Antarctica was the ultimate prize for explorers like Sir Ernest Shackleton and Captain Robert Falcon Scott.

Scott set off to conquer the South Pole while Shackleton aimed to cross the icy continent sea to sea via the pole. As they made their treacherous treks across the barren landscape, they took shelter in meager huts, for weeks or months at a time.

The structures were only built to last for a few years each, for the duration of voyages such as Scott's 1910-1913 Terra Nova expedition when he and his group missed being the first to reach the South Pole by a month, and for the Ross Sea party, who laid supplies in advance of Shackleton's famous cross-continental try. (His ship, "Endurance," sank, but he kept his entire crew alive. The Ross Sea party was not as lucky.)

Like time capsules of their epic adventures, three of the explorers' huts still stand to this day. But conservationists found them in dire disrepair - no wonder, given a century's worth of brutal conditions. Since 2005, teams of 62 experts from 11 countries went about restoring two of Scott's huts, in Cape Evans and Hut Point, and one of Shackleton's at Cape Royds.

The dilapidated structures, landmarks in and of themselves, also held more than 18,000 artifacts including clothing, scientific equipment and even several cases of whiskey. Encased at times in ice that crushed the buildings and melt water that flooded them in the summer months, there was a real danger they - and everything they contained - would be lost to the elements.

"Anyone who has had the privilege of visiting these sites will realize they are very special," Watson said. "You go into them and they still filled with the objects of the original explorers, thousands upon thousands of objects - everything you might want 100 years ago if you were exploring an unknown continent at the bottom of the world."

After a decade of work, the Trust announced last week that it had completed what it described as the "world's most extreme conservation project" to restore the huts. Sounding at times like a cross between "This Old House" and the reality show "Life Below Zero," about life near the Arctic Circle, the $6 million project was as much an act of historical reverence as an impressive feat of endurance in its own right.

Nothing of this scale had ever been tried in a polar region. But the value of these buildings was worth the work.

"We brought down a guy who was the chair of English heritage and he said, look, of all the thousands of sites that he had seen, two had had the most impact on him," Watson said. "One represented the worst of humanity and it was a world heritage site and that was Auschwitz. The other represented the best of humanity and it was Scott's hut in Antarctica."

Working at times in temperatures that dipped to 13 degrees below zero and in long periods of darkness, the teams fixed the roofs, removed layers of ice and weatherproofed walls. They built subterranean barriers to protect against flooding from melt water.

The restoration teams went out of their way to maintain historical accuracy. They replaced doors and windows installed in the 1970s at Shackleton's hut at Cape Royds with reproductions of the originals. They removed the floorboards, which bore knife marks from cutting up seals, restored them and put them back exactly as they were originally laid.

"These guys went through hell living in this place," Watson said. "What we didn't want to do was remove that history and those witness marks to an amazing story and an amazing sense of those places. It was critical we respected what was there."

The team cleaned corroded and damaged items inside the huts, and treated them to protect them from the elements, such as salt from the oceans, extreme fluctuations in humidity and the constant cycle of freeze and thaw. "In a museum, you have lots of things on your side. You can control humidity temperature and light," said Lizzie Meek, the Trust's program manager for artifacts. "Down there, it's completely uncontrolled."

They consulted hundred-year-old photos to return many items to their original places. The 18,000 artifacts uncovered and preserved included a hand-made stove built by Scott's Terra Nova expedition to burn seal blubber, and cans of anchovies and olives. Then, there was the hand-stitched clothing used by the Ross Sea party after their ship was "blown off its anchors" during a storm, and explorer Thomas Griffith Taylor's bicycle - the first in Antarctica.

A notebook from one of Scott's crew was found, which included things like dates and subjects of photographs. There was also a collection of 22 damaged negatives from Scott's expedition, which reveal images of icebergs and a mesmerizing portrait of one of the geologists.

There was the whiskey, of course - three crates found locked for a century in ice in Shackleton's hut - and even a block of butter.

"We reckon it's the world's oldest block of butter. It was 100 years old," Watson laughed. "It was pretty rancid. These amazing things are still there."

Collectively, the objects illustrate the hardship and isolation endured by men who were part of what is called the Heroic Age of Antarctic Exploration. The buildings offered the only protection from the whipping winds and snow storms. Teams spent weeks or months hunkered down in these huts, cut off from the world.

"All of the modern day explorers that I've met, even if they are traveling unsupported to the pole, they have got amazing backup plans, satellite phones, people tracking their every move," Meek said. "That is the extraordinary thing about the heroic era of explorers. They were so tough."

The hope now is that the huts will last last another century, an enduring testament to these tough, brave men.