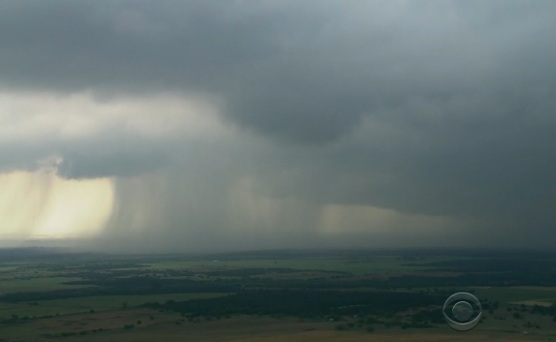 WICHITA, Kansas-- Thunderstorms bearing hail as big as grapefruit and winds approaching hurricane strength lashed portions of the Great Plains on Tuesday, but arrived without the grand tornadoes that many had worried about for days.

From the southern Plains to the Midwest and Northeast, about 60 million Americans were in the path of dangerous storms Tuesday night, CBS News' correspondent David Begnaud reported.

A rope tornado brushed fields south of Wichita, Kansas, and another small twister touched down in southwestern Indiana. As the sun went down on the western prairie, the Storm Prediction Center had received reports of bad weather from Texas to Nebraska to West Virginia, but none of them deadly.

As night fell, small twisters accompanied a line of thunderstorms as it rolled into Oklahoma City. Telltale power flashes from failing transformers pierced the twilight as another neighborhood lost power.

Forecasters posted a tornado watch for Oklahoma and Texas, saying the atmosphere could still be unsettled enough for twisters to develop.

"This is a particularly dangerous situation," the Storm Prediction Center alerted in red type in an afternoon advisory. It uses such language on only about 7 percent of its tornado watches. Forecasters had predicted a 90 percent chance of tornadoes and said 80 percent could have winds above 111 mph in much of Oklahoma and northern Texas.

A twister caused extensive damage in downtown Checotah, Oklahoma late Tuesday, and a search and rescue operation was underway at the Fire Department there after it was hit by high winds tha tmight have been from a tornado, reports CBS Tulsa affiliate KOTV.

Meteorologist Shawn Rossi said the hail was reported near the town of Deshler, Nebraska, about 10 miles north of the Kansas border, but it wasn't clear whether it caused any damage.

Funnel clouds were reported in the area, but Rossi said there weren't any confirmed tornadoes on the ground.

Heavy rain in Deshler led to flooding that forced the evacuation of a nursing home and assisted living facility.

The National Weather Service warned of an increased danger of flash flooding in Kansas between Manhattan and Topeka because of heavy rains.

Wichita State University closed all of its locations at noon Tuesday and postponed baseball and softball games scheduled for Tuesday evening. Schools and other organizations stretching from Arkansas City to Topeka also canceled many after-school activities.

Winds up to 60 mph were reported west of Topeka as cloud rotation spawned numerous tornado warnings that later were allowed to expire.

Officials at McConnell Air Force Base evacuated aircraft at the base in Wichita as a precaution. The planes and support personnel were sent to Washington and North Dakota.

Baseball-size hail was reported in Hanover, Kansas. More than two inches of rain fell in northeast Kansas as the system slices diagonally across the state.

Director of aviation John Bales said the airport was bracing for the worst when the sky turned green Tuesday, but there wasn't substantial damage.

Nickel-sized hail fell and the wind kicked up. A few trees and a power line snapped.

Hail the size of quarters fell on parts of the St. Louis region. Wind knocked over trees and power lines in Warren, Franklin and St. Charles counties in Missouri.

The region was under thunderstorm watches through most of the evening. No injuries or significant damage were immediately reported.

Some Indiana residents have reported seeing a tornado in the Ohio River community of Newburgh, but the fire chief says there was no confirmation of a touch down.

Newburgh Fire Chief Paul Campbell also says he doesn't have any reports of damage in the village of about 3,350 residents.