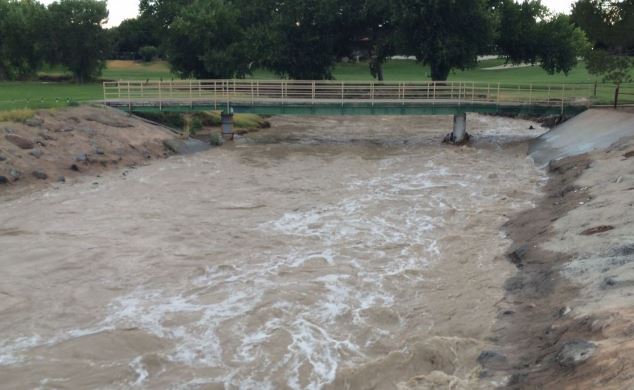 LAS VEGAS -- Heavy lightning and thunderstorms have brought wind, hail, flooding and injuries in and around Las Vegas on Thursday, where bustling intersections were swamped and firefighters rescued several people from flood control channels.

Clark County firefighters said that one woman was hospitalized in critical condition after she and two other people were plucked from a flooded wash near the Hard Rock Casino Hotel.

The woman was swept by the rain through the wash until golfers at the National Golf Course were able to rescue her. The victim, who was in cardiac and respiratory arrest, was transported to Desert Springs Hospital, CBS affiliate KLAS reported.

Firefighters say two other people and their dogs were rescued from another wash near busy Boulder Highway, several miles southeast of the Strip.

The National Weather Service says the heaviest rain fell in the Henderson area, where up to 1½ inch was recorded in less than an hour before 3 p.m.

Red Rock Canyon in the west had more than an inch of rain.

Golf ball-sized hail was reported southwest of the Strip, and quarter-sized hail fell near McCarran International Airport, where wind gusts were clocked at more than 50 mph.

Airline flights to McCarran were diverted to airports in California and Arizona while intense thunderstorms packing lightning, hail, wind and flooding swept through the area.

Crews said some departures were delayed for more than two hours, while some other arrivals and departures continued during brief lulls in the storm. She advised passengers to contact airlines about flight status.

NV Energy reported almost 4,700 customers were left without electricity. The utility company posted on its website that it was responding to scattered outages. It didn't identify locations or say when the power would be restored.

Television images showed cars entering the crossroads with water up to their headlights.

Police and firefighters helped get drivers and passengers from some vehicles, while public works crews closed some intersections and roadways due to water and debris.

Traffic officials reported at least one lane of a highway was closed due to flooding near the Galleria at Sunset mall in Henderson.

Lightning caused a two-alarm fire to spark in the southwest part of the valley. According to Las Vegas Fire and Rescue, which assisted Clark County Fire in fighting the blaze, a home located at 6190 Meadowgrass Lane caught fire after being struck by lightning, KLAS reported.