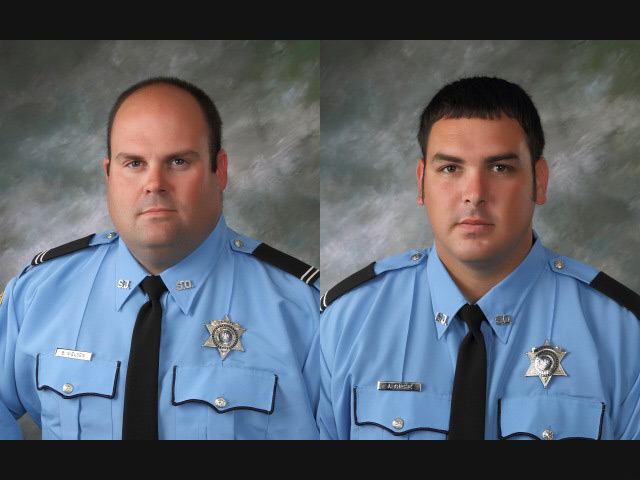 (AP) LAPLACE, La. - A man accused of making threatening comments about law enforcement officers in Nebraska was one of seven people arrested in connection with the shootings of four Louisiana sheriff's deputies, including two who were killed, state police said Friday.

The two other deputies were recovering from serious gunshot wounds after the Thursday morning shootings.

"We don't know precisely what happened yet," Ronnie Jones, an assistant to the state police superintendent, said at a news conference. "We're still putting pieces together.

The superintendent, Col. Mike Edmonson, said the case is complex, involving two different crime scenes, multiple weapons and numerous witnesses. He said evidence and interviews so far place five of those arrested at the scene where Boyington was shot -- the entrance of a parking lot used by contract workers on a job at a nearby oil refinery. Boyington was working off-duty on a security detail at the lot.

Shortly thereafter, more deputies were shot at a nearby trailer park where a car involved in the first shooting was spotted. There, St. John the Baptist Parish deputies Brandon Nielsen and Jeremy Triche were killed.

Arrested as accessories after the fact were 37-year-old Chanel Skains and 23-year-old Britney Keith. Authorities listed all as being from LaPlace, about 25 miles west of New Orleans.

Joekel and Brian Smith are hospitalized with gunshot wounds and will be jailed once they are out of the hospital. The others were jailed with bonds ranging from $350,000 to $750,000.

Trooper Melissa Matey, a state police spokeswoman, said "principal" charges indicate some sort of active participation in a crime, while accessory charges usually involve some aid to the suspect or an effort to hinder an investigation.

Neither Edmonson nor Sheriff Mike Tregre would discuss the criminal histories or possible motives of any of the suspects.

However, details on some suspects' past were beginning to emerge.

The Gage County, Neb., Sheriff's Office website listed Joekel among its most wanted fugitives, saying he is accused of making "terroristic threats" to patrons of a Nebraska bar and law enforcement officials.

The sheriff's office confirmed on the website that Joekel has been arrested in Louisiana but said it would release no other details, referring calls to Louisiana authorities. The same website also said Joekel is wanted in Kansas for felony flight to avoid arrest in connection with the Nebraska threats. The site said Joekel fled when Marshall County Sheriff's Office deputies tried to stop the vehicle he was driving.

In DeSoto Parish in northern Louisiana, Sheriff Rodney Arbuckle said authorities were working to confirm whether some of the suspects arrested in the Thursday shootings had been among a group of people under surveillance for suspicious activity at an RV park in his area. DeSoto deputies had started watching the RV park after three men and two women were seen getting in and out of vehicles with assault weapons.

Tregre did not have detailed conditions on the two wounded deputies, Boyington and Jason Triche. Jason Triche was somehow related to one of the slain men, Jeremy Triche.

However, he said both were recovering and gaining strength Friday. Triche, he said, "couldn't really speak but he could write," and Boyington was well enough to joke that he would be back at work Monday.

A candlelight vigil for the slain officers was planned Friday night in front of the St. John the Baptist Parish government building where employees spent part of the day lined up in front of two mobile blood donation buses, part of a blood drive for the wounded officers.

Complete coverage of the Louisiana officer shooting case on Crimesider