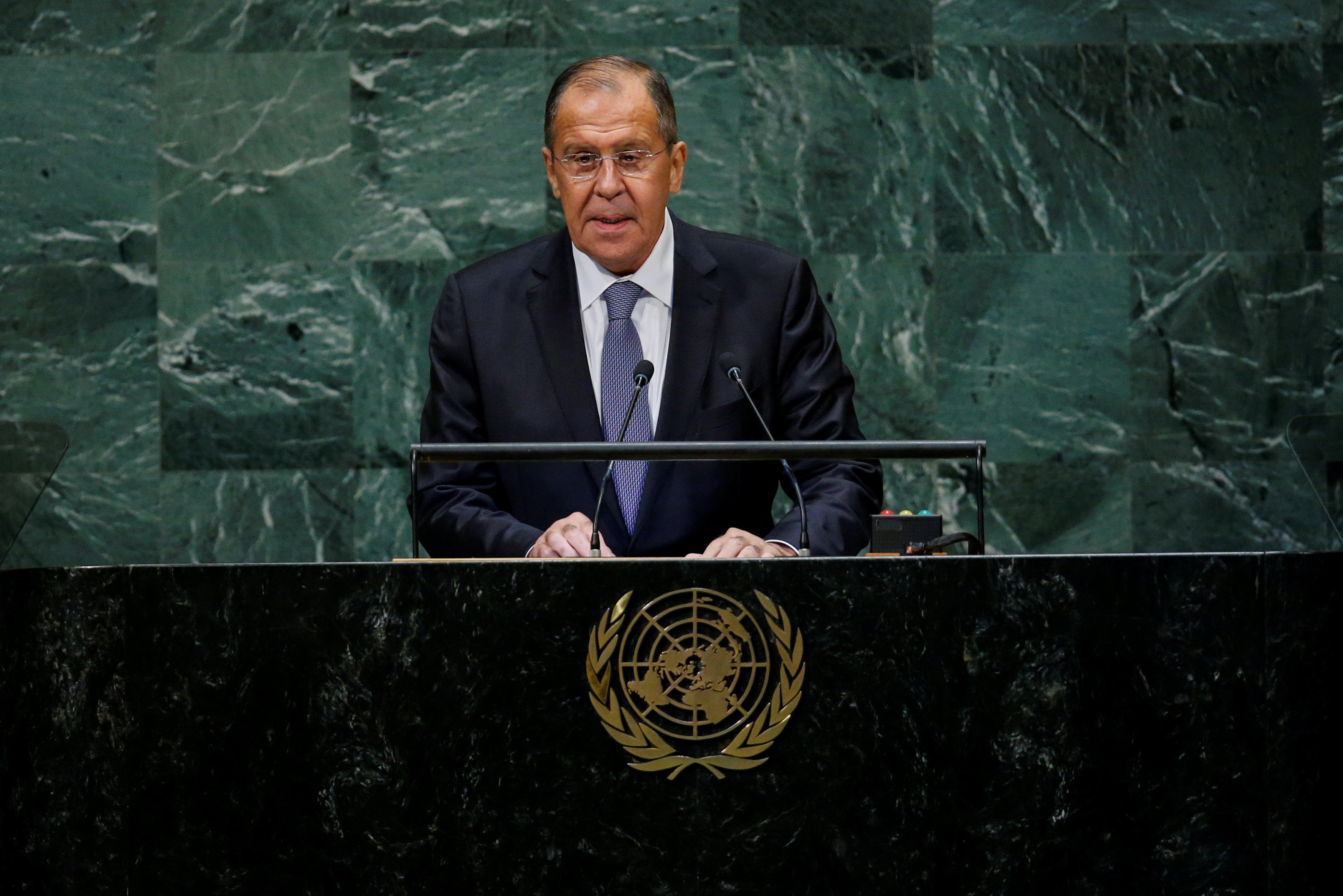 UNITED NATIONS -- Russia's foreign minister Sergey Lavrov took aim at President Trump in an address to the General Assembly on Friday, using quotes by former President Harry Truman. Lavrov did not mention Mr. Trump by name, but the attack was the most blistering in years.

First in an address to the General Assembly and later in a press conference, Lavrov repeated the Russian claim that the election meddling allegations are "baseless," and he went on to slam Trump administration policies in foreign affairs and trade.

"We observe the offensive of belligerent revisionism against the modern system of international law," he said. Lavrov cited the violations of the U.N. Middle East agreements, the Iran nuclear deal also known as the Joint Comprehensive Plan of Action (JCPOA), the World Trade Organization (WTO) framework and the climate agreement.

Western nations, Lavrov said, are substituting a "rules based order" for the "supremacy of law," and he attacked the "parochial, self­serving ambitions of a small group of countries."

At the press conference with reporters, after his General Assembly address, Lavrov said that U.S.-Russian relations "are bad and probably at their all-time low."

On the Middle East peace process, he "warned against unilateral approaches and attempts to monopolize this settlement process."

To NATO and Eastern Europe, he delivered a warning:  "We are concerned about the desire to open yet another line of confrontation in Europe - this time in the Balkans. The states of the region are being insistently drawn into NATO."

Lavrov went on to list what he characterized as misguided U.S. policy in Iran, Syria, and Venezuela. On Syria, he confirmed that Russia has begun to deliver the air-defense systems known as the advanced S-300.

He accused the U.S. of "political blackmail, economic pressure and brute force."

At times, though, the tone shifted.

Lavrov called for cooperation between the U.S. and Russia on cybersecurity and on negotiations in the Middle East, in Iran and for the end-game in Syria.

Richard V. Gowan, senior fellow at U.N. University, saw the Lavrov speech as two-pronged. "He is maintaining criticism of Trump but fishing for opportunities," Gowan said.

"Moscow realizes they have overreached in the last couple of years and they would like to strike a more cooperative tone," Gowan said, because they want the West involved in Syria's reconstruction and because they want sanctions against Russia lifted.

Lavrov said that Russia would continue to facilitate negotiations through the U.N. Quartet, a foursome of the U.S., Russia, the U.N. and the European Union, a group that has been stalled for years.

On Lavrov appealing to the U.S. to "cooperate" on cybersecurity, Gowan said that both Russian President Vladimir Putin and Lavrov have "doubled down" in recent months in their denials of election meddling, including to U.S. officials, and they want to cooperate to counter the accusations.

Lavrov even lamented there was no more of the old days when the U.S. and Russia found common ground at least in some areas.

"He seemed to be waiving a white flag," a senior Eastern European diplomat, who preferred to be unnamed, told CBS News.

"Not at all," Leon Aron, resident scholar and director of Russian Studies at the American Enterprise Institute (AEI), told CBS News.

"This has been a standard, almost ritual, narrative on both sides. And a good thing, too."

"Both nuclear superpowers feel the need to at least preserve a semblance of a dialogue," Aron said.

Gowan says, particularly on cybersecurity, the proposal for cooperation won't work because the U.S. and allies have always been suspicious and worried that Moscow will not abide by cooperation.

Russians have reasserted themselves at the U.N. over Syria, Gowan said.

After pushback by U.S. Ambassador Nikki Haley, Russia deftly managed to stall the publication of elements of a highly damaging U.N. sanctions report on North Korea, one that gave evidence of Russia's violation of sanctions.

On cybersecurity, with a new U.N. division on Counter-terror that includes cybersecurity run by a Russian national, Russia is looking to assert that there should be a new set of U.N. rules.

"Over the last couple of years the debate on cyberspace abuses has exacerbated," Lavrov said.

"Against the background of the recent developments, it is becoming even more relevant to elaborate under the U.N. auspices a set of global norms of responsible behavior of states in the information space."

Lavrov closed his U.N. address with the quote from Truman: "Great nations lead by the force of example rather than domination."