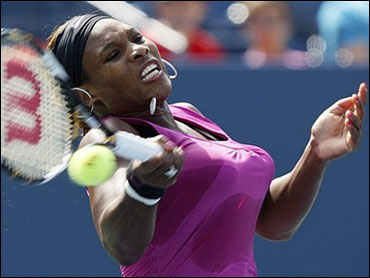 Playing her best at the most important events, Serena Williams re-established herself as the top player in women's tennis in 2009 and was a landslide choice as Female Athlete of the Year by members of The Associated Press.

Williams received 66 of 158 votes cast by editors at U.S. newspapers that are members of the AP. No other candidate got more than 18 votes in the tally, which was announced Tuesday.

Clearly, Williams' most infamous on-court episode - a tirade directed at a line judge after a foot-fault call near the end of her U.S. Open semifinal loss in September - didn't hurt her standing in the eyes of the voters.

"People realize that I'm a great player, and one moment doesn't define a person's career," Williams told the AP. "And I was right, for the most part: It wasn't right the way I reacted - I never said it was - but I was right about the call."

She also noted that the outburst, which resulted in a record fine and two-year probationary period at Grand Slam tournaments, "got a lot more people excited about tennis."

The 28-year-old American tends to do that, thanks to her powerful, athletic play and her outgoing personality.

"We can attribute the strength and the growth of women's tennis a great deal to her," WTA chairman and CEO Stacey Allaster said in a telephone interview. "She is a superstar."

Williams, who is based in Florida, also won the AP award in 2002, a seven-year gap that is the longest between AP Female Athlete of the Year honors since golf's Patty Berg won in 1943 and 1955.

"I'm just happy and blessed to even be playing seven years later. All this is a bonus, really," Williams said. "In 2002, I just was really dominant, and I think in 2009, I just brought that back. I kind of became that player again."

Williams finished the year at No. 1 in the WTA rankings. She topped $6.5 million in prize money, breaking the single-season tour record by more than $1 million. She won three significant singles titles - Wimbledon, the Australian Open and the season-ending tour championships - and paired with sister Venus to win three Grand Slam doubles championships.

"An incredible performance," Allaster said. "Her game just continues to improve through this long career she's had."

Williams went 50-12 in singles, an .806 winning percentage that was the highest for any woman who played at least 20 matches in 2009. She tied for the tour lead in singles titles. She led the tour with 381 aces, 75 more than anyone else, and also led in percentages of first-service points won and service games won.

Her two Grand Slam singles titles raised her career total to 11, the most among active women. At the year's other two majors, she lost to the eventual champion: Svetlana Kuznetsova at the French Open, Kim Clijsters at the U.S. Open.

Zenyatta, the 5-year-old mare who capped her 14-0 career by becoming the first female horse to win the Breeders' Cup Classic, finished second for the AP honor - with 48 fewer votes than Williams. For context: Last year's AP honoree, WNBA star Candace Parker, edged runner-up Lorena Ochoa by a single vote, while two other athletes finished within seven votes of Parker.

Clijsters, who came out of retirement only weeks before winning the U.S. Open, was third in 2009 with 16 votes. Lindsey Vonn, who won her second consecutive overall title in Alpine skiing's World Cup, finished third with 15 votes, followed by Diana Taurasi, the WNBA's MVP, who received 14.

In what was widely considered the best women's tennis match of 2009, Williams was one point from defeat before coming back to beat Beijing Olympics gold medalist Elena Dementieva 6-7 (4), 7-5, 8-6 in the Wimbledon semifinals. The affair lasted 2 hours, 49 minutes - longer than any All England Club women's semifinal or final on record.

Williams hit 20 aces in that victory, then beat her older sister in the final two days later.

The younger Williams also beat her sibling in the season-ending tour championships title match on Nov. 1.

And what does she have planned for 2010?