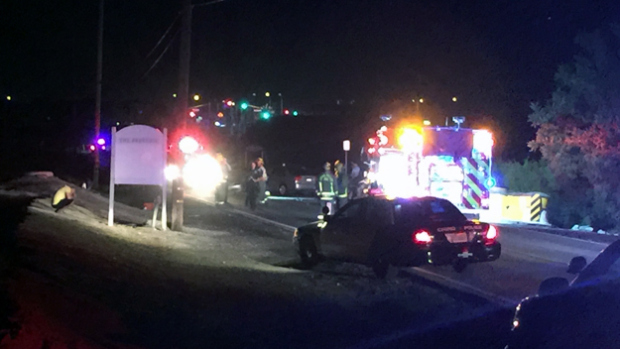 IRVINE, Calif. - A pair of deadly nighttime crashes only hours apart in Southern California each killed five people, including a group of teenagers returning from an amusement park who were burned beyond recognition, officials said Saturday.

The 16-year-old driver was the lone survivor of the crash of a BMW sedan at 2:15 a.m. Saturday carrying six teens returning from the Knott's Berry Farm amusement park in Buena Park, in its popular October guise as "Knott's Scary Farm," authorities said.

The car flew off Interstate 5 in Irvine, crashed and caught fire, killing three teenage boys and two teenage girls, Orange County Fire Authority Capt. Steve Concialdi said. The white sedan was flattened on top and covered with burn marks as it was towed from the scene.

"This is a horrific accident," Concialdi said.

Authorities had not yet identified the teens, but the three boys all played for the same soccer team, the Los Angeles Times reported.

The boys failed to show up for their 8 a.m. game for the elite 14- and 15-year-old players of the Mission Viejo Soccer Club, and Coach Billy McNicol said he got a call afterward from a family member that all three had been killed.

"These are good boys," he told the Times, his voice breaking. "We are devastated. Just devastated."

About five hours earlier on Friday night, three vehicles collided on an isolated two-lane road on the edge of Chino, a city east of Los Angeles in San Bernardino County. Authorities were working to identify the dead and determine the cause Saturday afternoon, police spokeswoman Monica Gutierrez said.

The lone survivor of that three-vehicle crash - the driver of a Honda Civic -was released from the hospital, Gutierrez said. The dead included four in a Chevy truck and one in a Honda Accord.

The Irvine crash, whose cause was under investigation, also sparked a quarter-acre brush fire that took about 30 minutes to extinguish, Concialdi said.

The 16-year-old driver was in serious condition Saturday afternoon with a head injury after undergoing surgery at Mission Hospital, officials said.

In California, drivers under 18 may not drive between 11 p.m. and 5 a.m., and they cannot have passengers under 20 years old in the car unless a licensed driver over 25 is in the vehicle.

There were no adults in the car, but authorities had not filed charges because investigators were still talking to parents, California Highway Patrol Officer Florentino Olivera said. "They are so distraught it is taking time," he said.

The car is designed to hold a maximum of five people and had six inside. Investigators were determining how many were wearing seat belts.

Officials investigating the crash shut down three lanes of southbound Interstate 5 and a transition road for most of the day Saturday.