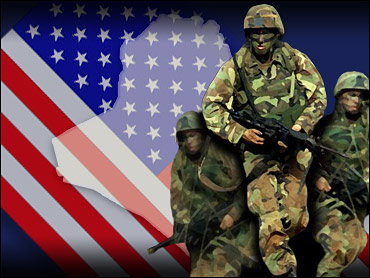 The Senate rejected a call for the withdrawal of U.S. combat forces from Iraq by year's end on Thursday as Congress erupted in impassioned, election-year debate over a conflict that now has claimed the lives of 2,500 American troops.

The vote was 93-6 to shelve the proposal, which would have allowed "only forces that are critical to completing the mission of standing up Iraqi security forces" to remain in 2007.

The vote came alongside a daylong debate in the House, where Republicans defended the war as key to winning the global struggle against terrorism while Democrats excoriated President Bush and his policies.

"We must stand firm in our commitment to fight terrorism and the evil it inflicts throughout the world. We must renew our resolve that the actions of evildoers will not dictate American policy," House Speaker Dennis Hastert, R-Ill., said in remarks laden with references to the Sept. 11, 2001, terrorist attacks.

The war was "a grotesque mistake," countered the Democratic leader, Rep. Nancy Pelosi of California. "The administration continues to dig a hole. They refuse to come up and see the light," she said.

Choreographed by the GOP, the debate unfolded four months before midterm elections that will decide the control of Congress. The administration, for its part, was so determined to get its message out that the Pentagon distributed a highly unusual "debate prep book" filled with ready-made answers for criticism of the war.

"Is it al Qaeda or is it America? Let the voters take note of this debate," said Republican Rep. Charles Norwood of Georgia, attacking war critics as defeatists who do not deserve re-election.

Countered Rep. Carolyn Kilpatrick, D-Mich.: "America, listen. Look. Should we stay the course or should we have a plan of redeployment to protect our troops and to protect America?"

The United States has absorbed the deaths of 2,500 troops in the three-year conflict, which began when a U.S.-led invasion toppled Saddam Hussein, but quickly turned sour in the face of a brutal insurgency.

Reacting to the new milestone on combat deaths, White House press secretary Tony Snow said, "It's a number." He said that Mr. Bush "feels very deeply the pain that the families feel." As the updated death toll was announced at the Pentagon, the House and Senate held moments of silence.

Polls show the war has become unpopular. But Mr. Bush has tried to rally support in the days since the death of terror leader Abu Musab al-Zarqawi, and the recent completion of a new Iraqi government.

The Pentagon's 74-page battle plan for the debate says that "Iraq will become a haven for terrorists, murderers and thugs," if the United States leaves "before the job is done."

"We cannot cut and run," it says at another point, anticipating Democratic calls for a troop withdrawal on a fixed timetable.

The Associated Press obtained a copy of the document. It was sent to both Republicans and Democrats and it laid out the administration's positions in strong terms and offered page after page of counterpoints to criticisms that Democrats typically level against Mr. Bush's war policies.

"In this fight for the future of peace, freedom and democracy in the Middle East and around the globe, winning should be our only option," said Rep. Phil Gingrey, R-Ga.

"Stay and we'll pay," countered Rep. John Murtha, D-Pa., who criticized "the failed policy of this administration" and lamented the lives lost, billions of dollars spent and the bruised U.S. image since the war started. "It's time to redeploy and be ready." he said.

Republicans arranged for the debate to culminate in a vote either later Thursday or Friday on legislation — a resolution — that labels the Iraq war part of the larger global fight against terrorism and says an "arbitrary date for the withdrawal or redeployment" of troops is not in the national interest.

Across the Capitol, partisan tensions on the Iraq war were clear as the Senate sent the president another $66 billion for the wars in Iraq and Afghanistan and debated annual military legislation. Sen. John Kerry, the Democratic Party presidential candidate in 2004 and a potential 2008 standard-bearer, was expected to introduce an amendment that calls for the administration to redeploy combat forces from that war zone by year's end.

As the death toll and price tag of Iraq rise, opinion polls show voters are frustrated with the war and favor Democrats to control Congress instead of the Republicans who now run the show.

Sensitive to those political realities, House Republicans sought to put lawmakers of both parties on record on an issue certain to be central in this fall's congressional elections.

Democrats said the debate was a farce, since Republican leaders won't allow votes on anything that would express a view different from theirs, CBS News correspondent Bob Fuss reports.

They also complained that Republicans refused to allow them to present an alternative resolution. But even though they tried, Democrats weren't able to agree on such an alternative.

In both the House and Senate, Democrats appear to be divided into three camps. Some want troops to leave Iraq this year. Others object to setting any kind of timetable. A number of them want the United States to start redeploying forces by year's end but don't want to set a date when all troops should be out.

House Democrats are mindful that voting against such a resolution could leave them vulnerable to attacks by Republicans who could claim that Democrats who opposed the resolution don't support U.S. troops and advocate a "cut-and-run" strategy.

To that end, a memo this week by House Majority Leader John Boehner (.pdf), R-Ohio, urged his fellow Republicans to frame the debate as "a portrait of contrasts between Republicans and Democrats."

Republican leaders portray the debate as the first of its kind since the Iraq war started in 2003. But they staged a similar vote on a resolution rejecting the immediate withdrawal of troops last year after Murtha, in a reversal, called for a quick exit from Iraq.