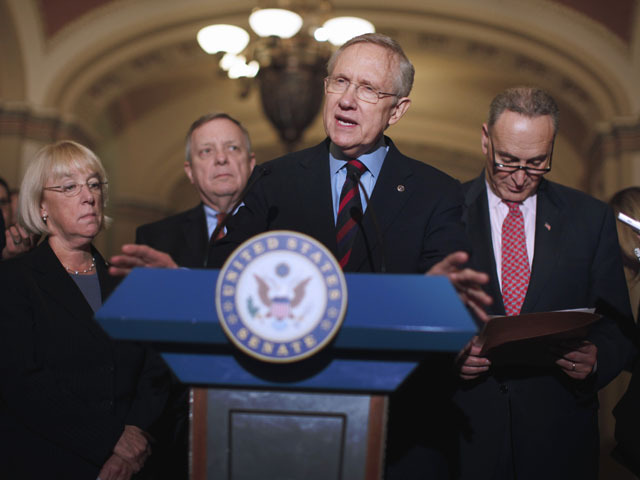 Democratic leaders in the Senate are demanding that the Republican National Committee reimburse taxpayers for the cost of the House Select Benghazi Committee's activities.

In a letter to RNC Chairman Reince Priebus, the four top Democrats said that several Republicans have made clear that the panel has been used for political purposes to target 2016 Democratic frontrunner Hillary Clinton and that it has inappropriately used $4.7 million.

"Due to the political nature of the committee, we believe it is inappropriate that a reported 4.7 million taxpayer dollars were used to finance its operations and that the RNC subsequently orchestrated numerous fundraising opportunities in its wake," they wrote. "Therefore, we urge the RNC to fully reimburse the U.S. taxpayer and cease all fundraising opportunities linked to the Select Committee."

They referred to comments made recently by House Majority Leader Kevin McCarthy, R-California, and another House Republican, Richard Hanna, R-New York, in which they both suggested in media interviews that the Benghazi Committee has been used to damage Clinton's presidential campaign.

In addition, the Democrats said public reports have shown that the Benghazi panel has spent more than the budget of the House Intelligence Committee. They added that the National Republican Congressional Committee has solicited donations related to the Benghazi panel's efforts.

"It is clear from these candid comments and public reports that the Select Committee on Benghazi has retreated from the pursuit of the facts and instead is operating a political opposition machine against Secretary Clinton," they said. "Therefore, the continued use of taxpayer funds is wholly inappropriate."

Their demand to pay taxpayers back comes a day before Clinton is set to testify before the committee and a few days after Democrats on the panel released a report concluding that their interviews have discredited GOP claims about the 2012 attacks.

Democratic members of the committee are now weighing whether they should quit after Clinton testifies. Key Democrats have also called on Republicans to disband the panel.