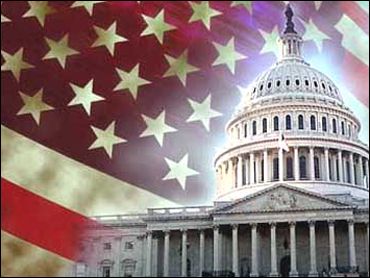 The Senate Judiciary Committee gave its nod Thursday to a constitutional amendment to protect the American flag from desecration, moving it to the Senate floor where vote-counters in both parties say it could be within one vote of passing.

The 11-7 vote sent the amendment to the floor. Majority Leader Bill Frist has said the measure will get a Senate vote this month.

Timed for consideration during the patriotic season between Flag Day, which just passed, and the Fourth of July, the amendment is designed to appeal to veterans of the armed forces during this year of November midterm elections.

"The Congress shall have power to prohibit the physical desecration of the flag of the United States," the amendment reads. To become the Constitution's 28th amendment, the language must be approved by two-thirds of those present in each chamber, then ratified within seven years by at least 38 state legislatures.

The House a year ago passed the bill 286-130, more than the required two-thirds of those present to pass. Vote-counters on both sides of the issue say the amendment has commitments of support from 66 senators, one fewer than the required 67 votes if all 100 members of the chamber are present.

Sen. Dianne Feinstein was the lone committee Democrat to vote for the measure, saying its language is designed to both protect the flag and U.S. constitutional free speech protections.

The committee also rejected an amendment by Sen. Joe Biden to replace "desecration" with specific types of defilement. Using the word desecration, he said, would leave the government too much power to define the term.