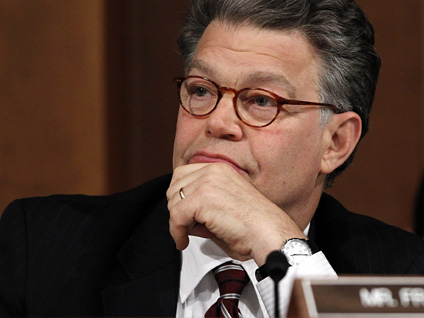 With troops on the ground in Iraq and Afghanistan and new military operations underway in Libya, Sen. Al Franken says it's time for Congress to more seriously consider how the United States will pay for its wars.

The Democratic senator from Minnesota introduced the "Pay for War" resolution Wednesday to require Congress to offset any costs for military operations that go beyond the Defense Department's base budget. If the resolution were to pass, Congress would have to either raise revenues or cut spending to pay for military activity.

"This is not a symbolic resolution," Franken said on the Senate floor yesterday. "It would return us to the traditional American way of paying for wars, where the Congress and the nation confront-head on-the financial cost, commitment, and sacrifice of going to war."

President Obama has included war spending (referred to as spending for Overseas Contingency Operations) in his budget requests. For instance, in his proposed 2012 budget, he requested $118 billion for Iraq and Afghanistan. Franken, however, said that simply including war spending in a budget that is not balanced doesn't go far enough.

"The momentous decision to go to war deserves a way of paying for those wars that matches the seriousness of that decision," he said. "Overseas Contingency Operations should be paid for."

Franken said his legislation would exempt the spending the president requests for Iraq and Afghanistan in his regular Defense budget, but that any additional spending for those wars would have to be paid for.

He said the situation in Libya added new urgency to his legislation. Both Democrats and Republicans in Congress have expressed concern about the fact that the Obama administration only consulted with a handful of congressional leaders before deciding to lead internationally-backed air strikes in Libya.

As the Defense Department racks up a bill in Libya, Franken yesterday reminded Congress of how much the U.S. has already spent in Iraq and Afghanistan. Including this fiscal year, the Congressional Research Service has estimated that Congress will have approved one and a quarter trillion dollars for those military operations, Franken said -- $806 billion for Iraq and $444 billion for Afghanistan.

"That is a staggering sum of money," Franken said. "And it's been financed through debt, through borrowing from other countries and emergency supplemental spending bills."

"What's more, the Iraq war was accompanied by a massive tax cut," Franken continued. "That failed fiscal experiment created the impression that going to war requires no financial sacrifice."