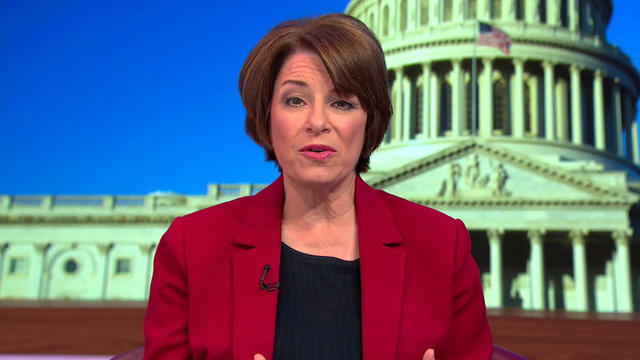 Sen. Amy Klobuchar, D-Minnesota, said that fellow members on the Senate Judiciary Committee are being "shut out" from getting any information from any other witnesses and accusers of Judge Brett Kavanaugh as the committee plans to move ahead with the confirmation process to send Kavanaugh to the United States Supreme Court.

"Even in the Anita Hill hearing, we had dozens of witnesses that came forward and were allowed to testify. This time all of that is being shut out," Klobuchar told "CBS This Morning" on Tuesday.

She added, "as a former prosecutor, I think you have to at least get the facts down, I think it's important, no matter what side you're on on this, whether you want him or you don't want him, don't you want to have the facts?"

Following weekend-long negotiations with Senate Judiciary Committee staff members, Chairman Grassley announced that Kavanaugh's first accuser, Dr. Christine Blasey Ford, would be testifying in a public hearing on Thursday. Kavanaugh is slated to testify once again immediately after Ford. Despite new allegations of assault against Kavanaugh that have arisen this week, there are currently no other witnesses listed to deliver testimony on the committee's schedule.

Klobuchar said typically a prosecutor dealing with such allegations would look at what the other witnesses say, but "in this case, we're being shut out from getting that information."

As Kavanaugh has now publicly denied ever committing any acts of sexual assault either while a high school student or in college at Yale University, Klobuchar says that the Senate needs to give Kavanaugh and his accusers the opportunity to "make their case to the American people."

Klobuchar calls off Minnesota rally as protesters take over stage

"He said that he wanted a fair process, to me that obviously means allowing for some limited investigations, a background information check where you simply go and check with the people that these women said were there and it's a lot different to have to be interviewed by an FBI agent under oath than it is talking to a reporter perhaps off the record," said Klobuchar.

Klobuchar also noted that Dr. Ford came forward and talked about her encounter "before Judge Kavanaugh was even famous."

"There she was coming forward to a marriage counselor saying that this had happened to her, I think that's interesting because she didn't really have a motivation to make that up," she said.