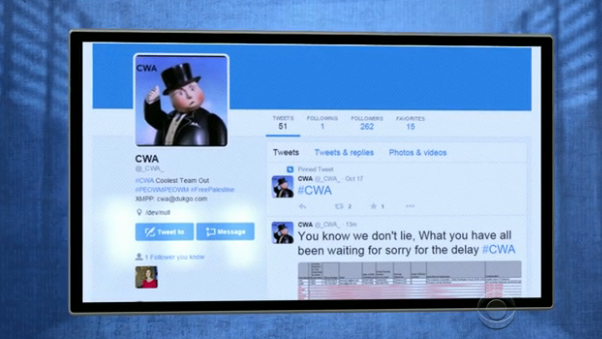 There may be more than one person responsible for hacks on the email accounts of the CIA director and the director of Homeland Security.

The person claiming to be responsibly for the hacks told CBS News correspondent Jeff Pegues there are six people in his group who helped breach the accounts. And the same Twitter handle that released sensitive information about public officials claims also to have had access to a White House official.

There are threats of more disclosures to come.

Late on Monday, the person tweeting under the handle CWA followed through on threats to release sensitive information.

"You know we don't lie, what you have all been waiting for sorry for the delay," the tweet read.

Along with the statement came an attachment with the names, Social Security numbers and phone numbers of 20 people said to be affiliated with the head of the CIA.

One document purporting to come from CIA Director John Brennan's AOL email account contains a spreadsheet of people, including senior intelligence officials, along with their Social Security numbers, although the hacker redacted the numbers in the version he posted on Twitter. It's unclear why Brennan would have stored such a document in his private email account. Based on the titles, the document appears to date from 2009 or before.

In a statement the CIA would only say that it has referred the matter to the appropriate authorities. CBS News contacted some of the people whose names were on the list and there is a common thread-- many worked for the Obama transition team in 2008.

When people visit the White House and other secure facilities, they are required to supply their Social Security numbers. Brennan could have been forwarding a list of invitees to the White House when he was President Barack Obama's counter terrorism adviser, the job he held before he became CIA director in 2013.

The hacker told the Post he had obtained a 47-page version of Brennan's application for a security clearance, known as an SF86. That document - millions of which were stolen from the federal personnel office last year by hackers linked to China - contains detailed information about past jobs, foreign contacts, finances and other sensitive personal details.

No such document appears to be posted on the hacker's Twitter account, but it's not clear whether the hacker posted it elsewhere.

The hacker, an alleged high school student, seems to be feeding off the publicity the stunt has generated, and that's in part why investigators are reluctant to talk about it. In a tweet, the hacker said: "We are not doing this for personal satisfaction, we are doing this because innocent people in Palestine are being killed daily."