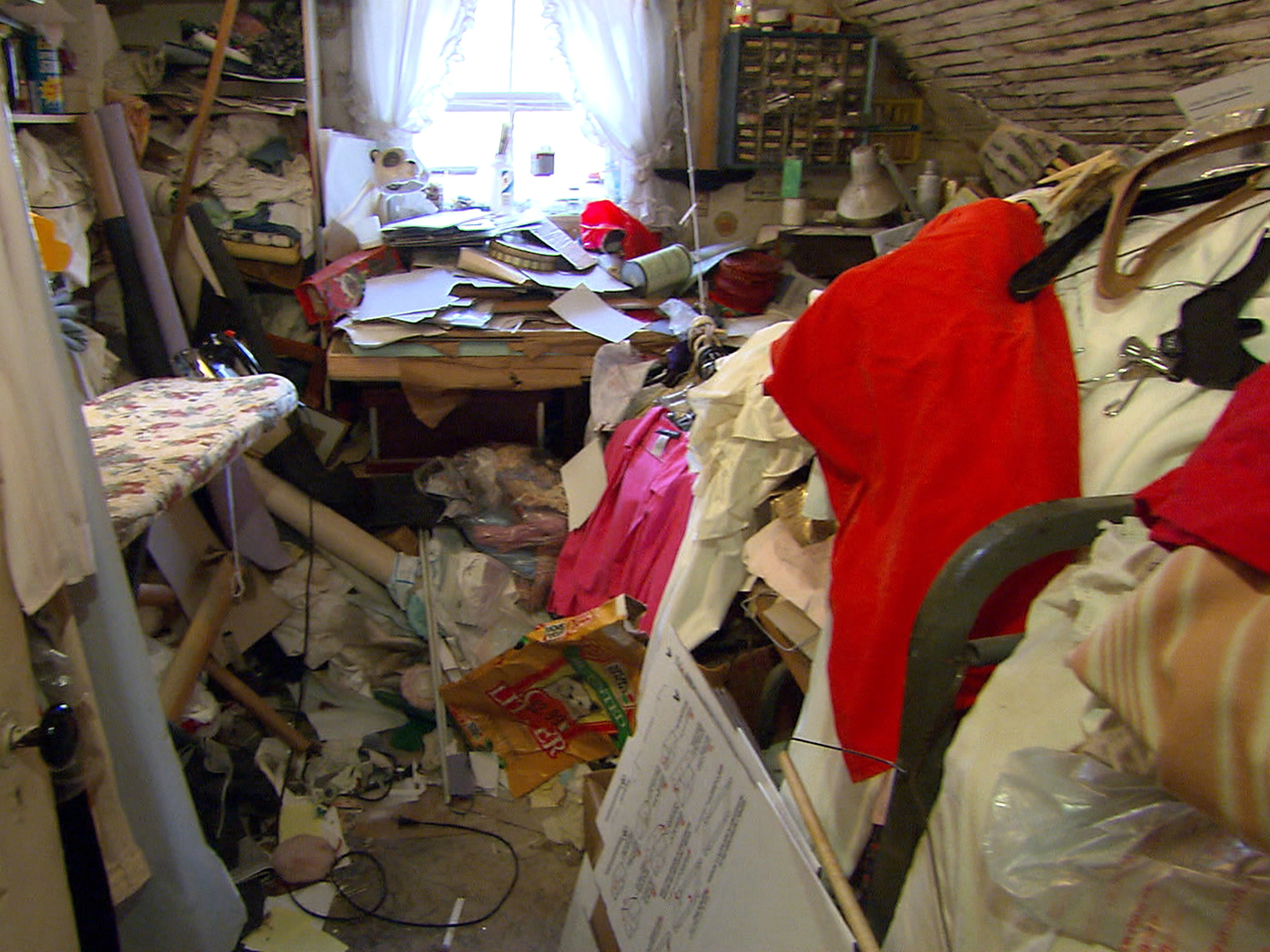 Too much of everything! Garland's Greenfield, Mass., home is packed with belongings she just can't part with. "Decades of stuff, yes!" she said. "It has been picked up at times in the past. And the volume of clothing has overwhelmed me. More has to leave the house."

It's not that she hasn't tried. After years of forcing herself to throw things out, she can actually eat in her kitchen again. But Garland continues to hoard -- items like the wire handles from Chinese takeout containers.

"How often do you end up needing it?" asked Braver.

"Not very often," she replied. "But you know, I hate to waste anything, and that has been part of my problem over the years."

Garland is just one of millions of people who hoard. It's estimated that up to five percent of the U.S. population has the problem, with an equal number of men and women.

And a new CBS News poll finds that a third of all Americans say they have too much clutter in their homes.

The subject of hoarding is so sensational it's become fodder for reality TV shows.

But beyond the spectacle, there's new recognition that hoarding is caused by a mental condition. Last Spring, for the very first time, the Diagnostic and Statistical Manual of Mental Disorders, or DSM-5 -- the handbook for mental health experts -- recognized hoarding as a specific disorder.

The diagnosis of hoarding as a mental disorder is no surprise to Smith College psychology professor Randy Frost, co-author of "Stuff: Compulsive Hoarding and the Meaning of Things." He says the formal definition of a hoarder is someone who has difficulty letting go of possessions.

Braver said, "You accumulate way more stuff than you need and you have a really hard time saying goodbye to it?"

"That's exactly right," Frost said. "But there's a third component that's equally important, and that is the inability to keep it organized."

Frost has been studying and writing about hoarding since 1990. The public has long been fascinated by dramatic stories on the subject. Back in 1947, for example, the bizarre tale of the Collyer brothers, descendants of a well-to-do New York family, made headlines after their bodies were discovered in their jam-packed townhouse.

But almost no scientific research had been done on hoarding until about 20 years ago.

"We put an ad in the newspaper thinking we'd try to find somebody who had this behavior," said Frost. "And we got 100 telephone calls.

"And what we discovered was there were houses that were really full, but yet no one had ever talked to them about it.  They'd never told anyone about it."

Frost's 20 years of study have revealed some key findings:

"The cut-off for where this becomes a disorder really has to do with the place at which this behavior influences their functioning, to the point that it-its harmful or impairing their ability to live," said Frost.

There are companies that help hoarders clean up and get rid of their stuff, but that may not really address the root of the problem. So Frost and several colleagues have developed a program they call "Buried in Treasures" that helps hoarders understand -- and change -- their behavior.

At support group meetings, "packrats" (as some prefer to call themselves) establish very specific weekly goals.

And Joanne Garland had something to brag about: "My goal was to tidy up the two bedside tables, because I tend to read in bed, and I did it," she said. "I did it!"

But Lillian Evers didn't have the same success: "Well, I still have my pile of mail that I eat on top of. And I sit there and look at it, and I say, 'What's stopping you? What's the anxiety? What's the fear?' But I don't have an answer."

In fact, a big part of the support group approach is getting participants like Mika Geffen to understand why they compulsively acquire things.

"It's an addiction," Geffen said. "I get a kick out of it, absolutely. And that is something the group has definitely helped with -- that the two most important things are being able to discard and, you know, slowing down on acquiring."

But for Carol Star, even recalling the moment when she admitted she had a problem is painful.

"I was at home," she said, "and I was surrounded by all these piles. And I felt like I was suffocating. And I think that's when I really knew that I needed help more than any other time in my life. 'Cause I didn't want to be drowned by my stuff. I wanted to find a way to make my house a house again, because it isn't right now."

The members of this group do have a success story in their midst: leader Lee Shuer, who said, "You can't just prove it in words, you know. You have to prove it in actions."

To see his neat kitchen now, you'd never know that eight years ago his home was such a disaster zone that his wife gave him an ultimatum..

"'It's me or the stuff. You have to make a decision,'" Shuer recalled. "And I made the choice to accept help right there."

Through the Buried in Treasures program, he has developed strategies for separating his belongings into "keep" and "give away" piles.

"Do you still keep yourself from adding more things, picking up some bargain somewhere?" asked Braver.

"I know that I haven't changed as a person; nobody else has either," Lee Shuer said. "You still have the impulse. But your reaction to it changes over time."

And, he added, "some of the thrill is gone for me."

But for Lee Shuer and anyone else with the urge to hoard, it is likely to be a lifelong struggle. "It is work, yeah," he said. "Because you're replacing something that might have been the one thing that made life worth living. That's pretty significant."

When Lin-Manuel Miranda sings about the drive of the "young, scrappy and hungry" immigrant, he's not singing about just any immigrant