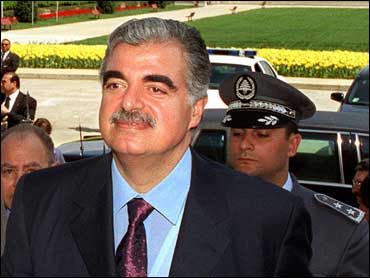 The U.N. Security Council gave strong backing Tuesday to the new international tribunal to prosecute suspects in the slaying of former Lebanese Prime Minister Rafik Hariri, reiterating that all states should cooperate to ensure those responsible are brought to justice.

The council welcomed Sunday's opening of the Special Court, which was established by the U.N. Security Council in 2007 and comprises seven foreign and four Lebanese judges who have yet to take office. It is funded by Lebanon and U.N. member states and based in the Netherlands to ensure the safety of staff and an impartial trial.

France's U.N. Ambassador Jean-Maurice Ripert called the court's opening "a very important step towards the fight against impunity and the fight for justice."

In a press statement, Security Council members "reiterated their strong support for the Special Tribunal" and recalled their resolution "which underlined the importance of the continuation of the full cooperation of member states with the office of the prosecutor ... in order to enable effective investigations and prosecutions."

Speaking at the opening ceremony, prosecutor Daniel Bellemare said he will continue his investigations without political interference and said he will call "as soon as possible" for Lebanese authorities to turn over four pro-Syrian generals who have been under arrest for more than three years for alleged involvement in the murders.

Bellemare, a Canadian, said he could issue several indictments as a result of his wide-ranging investigation into the Feb. 14, 2005, suicide bombing that killed Hariri and 22 others on a Beirut seaside street, but he would not say when.

The first U.N. chief investigator, Germany's Detlev Mehlis, has said the plot's complexity suggested that Syrian and Lebanese intelligence services had a role. Syria has denied involvement, but was forced to withdraw its troops from Lebanon, ending a 29-year presence.

U.N. legal counsel Patricia O'Brien, who attended the opening of the court near The Hague, Netherlands, told reporters Tuesday that under its rules Lebanon must hand over the generals within 60 days of the court's opening.

She said the next step is for the judges to be sworn in and that will be followed by a meeting of the tribunal to appoint the president of the court and adopt the rules of evidence and procedure.

Asked to name the judges and confirm that they would be sworn in on March 9, O'Brien said she could not confirm or deny the date and said the identity of the judges would not be released because "there are significant security concerns, or issues that we have to be extremely sensitive towards."

"The reason for this is ... the investigation into these crimes will be continuing until such time as the prosecutor has sufficient evidence to reach the threshold which he deems necessary to institute a prosecution," she said. "Therefore ... it would not be for security and other reasons appropriate to publicize the names of the judges at that stage."