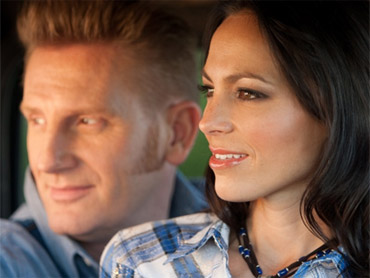 Country stars Joey + Rory know it takes two to tango when it comes to their country music careers - and for the husband-and-wife duo, there's just no going solo.

Also known as Joey Martin and Rory Feek, the couple became fan favorites in 2008 when they were finalists on CMT's reality TV show, "Can You Duet Season 1."

After finishing third, they released their successful debut album, "The Life of a Song," which entered the Billboard Country Album Chart at No. 10, earning them the 2010 ACM Top New Vocal Duo earlier this year.

Joey + Rory stopped by "The Early Show on Saturday Morning"'s "Second Cup Cafe" to sing "To Say Goodbye" and "This Song's For You" off of their latest CD, "Album Number Two," which will be released Sept. 14.

"This Song's For You," which hit the airwaves this July, is a tribute to all hard-working people, as well as our troops. The song is a collaborative effort, featuring members of the Zac Brown Band. It was co-written by Rory and Zac Brown while they were on tour together.

The couple, who were married on June 15, 2002, come from humble beginnings and have lead a quiet life, living on a farm outside Nashville.

Rory was a well-known songwriter and Joey was working on her solo career until they appeared on "Can You Duet."

Even though she has become a country star, Joey isn't afraid to roll up her sleeves and help pitch in at Marcy Jo's Mealhouse, a restaurant she and her sister-in-law co-own outside Nashville.

When Rory isn't doing chores on the farm, he is penning award-winning hits, which have included the No. 1 "A Little More Country Than That," recorded by Easton Corbin, "Some Beach," by Blake Shelton (multi-week), "Chain of Love," by Clay Walker and "Someone You Used to Know," by Colin Raye along with cuts by Kenny Chesney, Reba, Randy Travis, Terri Clark, Waylon Jennings, Buck Owens, among others.

While each brings forth their own contributions, a humble Rory admits he didn't anticipate being center-stage with his stunning wife.

"There was not an ounce of me that thought, 'Here is this beautiful woman and great singer in Joey, but throwing in her 42-year-old, overall-wearing husband will be the magic combination,'" Rory says with a laugh on the duo's official website.