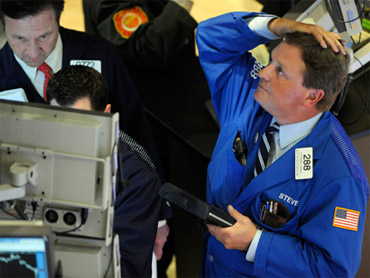 Members of the Securities and Exchange Commission approved the rules, which call for U.S. stock exchanges to briefly halt trading of some stocks that make big swings.

The exchanges will start putting the trading breaks into effect as early as Friday for six months. The New York Stock Exchange will begin Friday's trading session with five stocks: EOG Resources Inc., Genuine Parts Co., Harley Davidson Inc., Ryder System Inc. and Zimmer Holdings Inc. The exchange will gradually add other stocks early next week, expecting to reach by Wednesday the full number that will be covered.

The plan for the "circuit breakers" was worked out by the SEC and the major exchanges following the May 6 market plunge that saw the Dow Jones industrials lose nearly 1,000 points in less than a half-hour.

Under the new rules, trading of any Standard & Poor's 500 stock that rises or falls 10 percent or more in a five-minute period will be halted for five minutes. The "circuit breakers" would be applied if the price swing occurs between 9:45 a.m. and 3:35 p.m. Eastern time - almost the entire trading day.

The idea is for the trading pause to draw attention to an affected stock, establish a reasonable market price and resume trading "in a fair and orderly fashion," the SEC said.

On May 6, about 30 stocks listed in the S&P 500 index fell at least 10 percent within five minutes. The drop briefly wiped out $1 trillion in market value as some stocks traded as low as a penny.

The disruption "illustrated a sudden, but temporary, breakdown in the market's price-setting function when a number of stocks and (exchange-traded funds) were executed at clearly irrational prices," SEC Chairman Mary Schapiro said in a statement. "By establishing a set of circuit breakers that uniformly pauses trading in a given security across all venues, these new rules will ensure that all markets pause simultaneously and provide time for buyers and sellers to trade at rational prices."

Exchange-traded funds are increasingly popular investments that often track a market index such as the S&P 500 and can be traded throughout the day, unlike mutual funds. ETFs as a group were affected by the May 6 plunge more than any other category of securities.

The markets will use the six-month pilot period, ending on Dec. 10, to make needed adjustments based on how the new rules work, the SEC said. The scope of the rules could be expanded to securities beyond the S&P 500, including ETFs.

Schapiro said she wanted to see the program expanded quickly to cover thousands of public companies beyond the S&P 500.

The SEC commissioners approved the new rules on a 5-0 vote. They are taking effect following the agreement by the SEC and the big exchanges, and a 10-day public comment period. They apply to all U.S. exchanges and the Financial Industry Regulatory Authority, the brokerage industry's self-policing organization. Until now, most of the 50 or so U.S. exchanges have regulated themselves and designed their own tools for slowing or halting trading.

During the epic May swoon, the NYSE slowed trading according to its rules but the orders that couldn't be executed migrated in a torrent to electronic exchanges, industry officials have said.

Regulators still don't know exactly what caused the "flash crash," but they wanted to move ahead with remedies. A preliminary picture emerged in a recent report by staffs of the SEC and the Commodity Futures Trading Commission. Investigators have focused on, among other things, a possible link between the steep decline in prices of stock indexes and simultaneous and subsequent waves of selling in individual stocks.

Also being looked at is a severe "mismatch" of liquidity in the market that may have been worsened by the withdrawal of electronic traders and the use of so-called "stop-loss" market orders. Stop-loss orders set the price at which a stock is automatically sold when it declines to a specified level.

Nearly 21,000 trades were canceled because the exchanges deemed them erroneous after the plunge. The SEC is examining whether decisions to cancel trades were made fairly and may propose new rules for cancellation.

During the pilot period, the SEC staff will consider ways to address the risks of "stop-loss" and other market orders, and whether so-called "stub quotes" should be curbed or banned. Market makers use stub quotes as placeholders and they are often far above or below actual stock values. The SEC-CFTC report said their presence at the top and bottom of order books on May 6 may have accounted for many of the canceled trades.

The SEC already has rules requiring market-wide halts in trading if the Dow falls 10 percent, 20 percent or 30 percent. None of them were triggered on May 6. In light of the plunge, the SEC staff and the exchanges are considering changes to those rules, also known as circuit breakers.