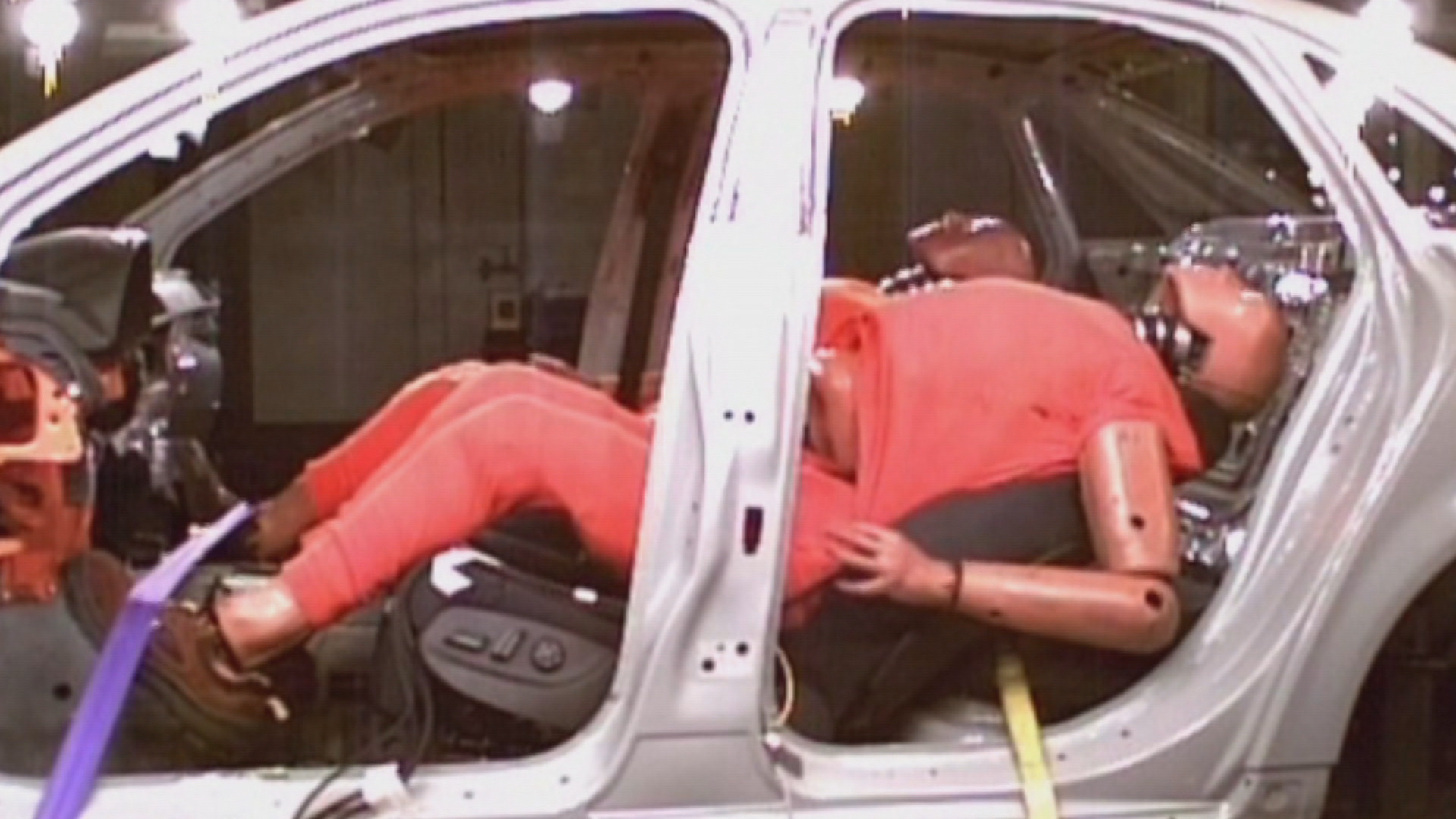 Auto safety experts are demanding action on what they call a serious safety defect. The move comes days after a Texas jury awarded more than a $124.5 million verdict against one automaker for a problem car companies admit would only cost a couple of dollars to fix.

Crash test videos obtained during the course of our CBS News investigation show how when cars are hit from behind, the front driver and passenger seats of many vehicles can collapse backwards, launching the occupants into the backseat area.

For years, the National Highway Traffic Safety Administration (NHTSA) has told parents the safest place to put children is in the backseat. Cases of apparent seatback failure reviewed by CBS News show, while drivers can also suffer catastrophic injury, children in the backseat are suffering the worst of the injuries, even death.

It happens in an instant.

Eleven-year-old Jesse Rivera Jr. is living with the consequences of a seatback failure. He was sitting behind his father in the backseat of his family's Audi sedan when it was rear-ended in San Antonio, Texas in 2012.

"We're constantly told to put children in the back seat," said Jesse Rivera Sr., "but you just don't know that this danger is there."

The driver's seat Jesse Sr. was sitting in broke, launching him head first into his son. Both were taken to the hospital. As the elder Rivera was being treated in the emergency room, his wife, Kathy, told him of their son's condition.

"She said, it's bad. He's got a real bad head injury and...he may not make it through the night," Rivera said, fighting back tears. "So I started praying, I said, 'Please God, don't take my boy.'"

Jesse Jr. then just 7 years old, was left with permanent brain damage, partial paralysis and the loss of some of his eyesight. His younger brother Patrick, sitting behind the unoccupied front seat, was uninjured. Jesse Jr. will need care for the rest of his life.

"There's times when he'll see all the other kids playing and he'll sit there and he watches them and he gets up and walks away with his head down," said Rivera's mother, Kathy.

In a deposition for the case, a company engineer said the car was designed so someone in the backseat would "support the front seat with his knees."

The carmaker's attorney argued the seats were designed to absorb the impact of a collision, even showing a crash test video of the seats collapsing while questioning the EMT who responded to the accident scene. The EMT asked, "So you are saying the seat is supposed to do that?"

"Yes, absolutely. Proudly so. It's absorbing energy," the lawyer responded.

Ultimately the jury ruled in favor of Rivera family finding young Jesse's injuries resulted from Audi's "gross negligence." In making their decision, the jury assigned 55 percent of the responsibility for the accident to the carmaker, 25 percent to the driver that rear-ended the Rivera's and 20 percent on Rivera, Sr. The elder Rivera was not wearing a seat belt and Jesse, Jr. was not in a booster seat at the time of the accident.

In a statement to CBS News, Audi said, "We of course are not pleased with the verdict and we will evaluate the next steps to be taken. It's worth noting that neither the driver nor the injured boy were wearing seat belts nor was the boy seated in a booster seat.''

The automaker did not respond to additional questions about its seats.

"If you're going to defend your product, why wouldn't you bring someone from Germany, a design engineer from Germany to explain why your product is not defective. But they didn't do that," Wigington said.

The jury ruled against Audi even though the seats in question met or exceeded the federal standard for strength. An accident expert hired by CBS News showed us the standard is so low even a banquet chair can pass. In fact, nearly every major American, Japanese and Korean automaker has seen similar cases recently.

Internal documents show carmakers and the NHTSA have known about the potential for seatback collapses for decades.

"Shame on them. My boy wouldn't be hurt if they'd have done their jobs" said an emotional Jesse Rivera, Sr.

NHTSA insists it has looked into the issue, but says it is "very challenging" to upgrade the standard because these accidents are "rare." The agency stopped reviewing changes to the standard in 2004.

A small 2008 study by the Association for the Advancement of Automotive Medicine, reviewed by NHTSA, found "a doubling of the injury risk" to children if the seat in front of them "deformed" or suffered some form of a collapse in a rear end collision. Seventy-one percent of the crashes studied involved a car where there were occupants seated in front of children, and "deformation of the front seat back into the child's space was reported in eight percent of cases."

NHTSA staffers argue the scale of the study was too small to build a case for changing the existing standard and also point to two other studies that question if improving seat strength would reduce injury risk.

Through interviews with lawyers and reviewing court cases, our CBS News investigation has identified more than 100 people nationally who were severely injured or killed in apparent seatback failures since 1989. The majority were children. Seventeen have died in the past 15 years alone.

"My child got turned into a human safety device. An airbag," said Stephanie Collins as she cried. Her 7-year-old daughter Crystal Butler was among the 17 children killed. "She saved my life and it wasn't supposed to be that way."

Improving the seats would not necessarily be expensive. In an earlier seatback failure lawsuit, an engineer being deposed said strengthening them would cost "on the order of a dollar or so."

Still, accident experts interviewed for this CBS News investigation say at least three automakers--Mercedes Benz, BMW, and Volvo -- have strengthened their seats well above the NHTSA standard to guard against seatback failure. As far back as 1992, Mercedes showed 60 Minutes' Ed Bradley their stronger seat design.

The Center for Auto Safety filed a petition with the NHTSA urging the agency to warn parents of the potential danger of a seatback failure and to create a new seatback standard.

Despite repeated requests, NHTSA Administrator Mark Rosekind has not agreed to talk to CBS News about the seatback standard and refused to answer questions when Cleave caught up with him after he testified before Congress last October.

Safety experts advise parents to put their children in the backseat, behind unoccupied seats. If both front seats are occupied, they recommend putting the child behind the lightest front seat passenger. NHTSA also says children are safest in the backseat.

Rosekind told CBS News on Thursday that the agency will be putting out guidance for parents on what seats are safest for children in the back.

"We need to make sure that people make the good choices now and then we figure out, for the others that we've lost, we need to use those lives as motivation to figure out what else we could be doing. And we will do that," Rosekind said.

These are efforts that will come too late for the Rivera family, who as part of their case, showed a "day-in-the-life" video of Jesse struggling to complete relatively simple tasks.

"Your children are at risk and if you don't write your legislator and tell him to do something about this thing, nothing is going to be done," said Jesse, Sr. "More children are going to be hurt. And it could be your child."