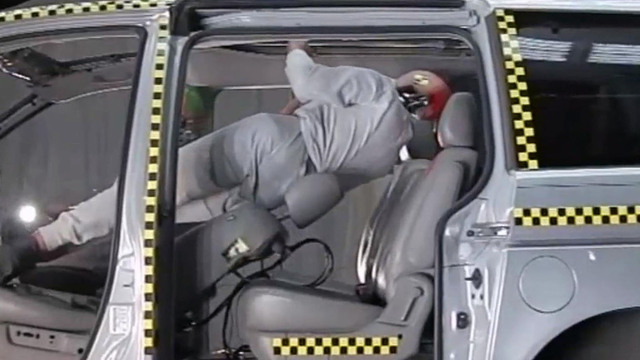 Experts say in certain crashes, some car seats can break and collapse, leading to paralysis or death. Even if you bought a car with a five-star safety rating, if you're hit from behind, your seat may not protect you or the children sitting behind you.

Every day on average, three children are killed and 470 injured in accidents - 11 percent of those child victims are in the rear seats, where the government recommends children sit, reports CBS News correspondent Kris Van Cleave.

Sixteen-month-old Taylor Warner loved the water and was just learning to walk.

"She had about six weeks when she was toddling around, and then it was over," said her mother, Liz Warner. Five years ago, the Warners' 2010 Honda Odyssey was rear-ended at 55 miles an hour. Taylor was in her car seat behind her father.

"I thought maybe she had just fallen asleep. And then when I looked and I noticed there was blood coming out of her face, I knew that something else was wrong," said Liz Warner.

That something was her father's seat back. It broke after collapsing on impact and struck Taylor in the face, killing her.

"And it was all because of some stupid car that we thought was the safest thing we could get for our family to protect them," said Warner, crying.

But crash tests show what can happen when a seat collapses -- the driver is launched backwards and slams into the child's face.

Drivers can also be injured when their heads crash into the back seat. Seventy-year-old Geneva Massie was paralyzed four years ago when the seat of her 2002 Dodge Caravan broke after the minivan was hit from behind.

"You just assume that they'll not break. You don't even actually think about it, that they would break," said Massie.

"Automotive crashes are dangerous and unpredictable events where bad things can happen. Our seat designs are based on reasonable and responsible engineering decisions focused on saving the greatest number of lives and mitigating the greatest range of injuries in the greatest number of possible accident situations. Designs change and improve over time based on new knowledge, technology and the march of innovation. FCA US vehicles meet or exceed all applicable federal safety standards and have excellent safety records."

Nearly every major American and Japanese automaker has seen similar cases, recently. Auto crash expert Alan Cantor, who has been examining seat back failures since the 1980s, says this happens every day.

CBS News hired Cantor's lab outside Philadelphia to test the strength of seats and the standard that regulates them, using a banquet chair.

"What we're trying to do is show how absolutely ridiculous the federal standard is," said Cantor.

The test consists of putting a brace across a seat, attaching it to a winch and pulling. This is the only test required to pass the federal standard.

With standards so low, Cantor finds all the vehicle seats - and even that banquet chair - meet or exceed the federal requirements, but failures can still happen.

In a 1996 deposition, a General Motors engineer admitted GM started tethering dummies to the seats during crash tests because the dummies were "expensive" and the chances of losing them "were pretty high."

Improving the seats wouldn't be expensive. One engineer being deposed said strengthening them would cost "on the order of a dollar or so."

Longtime accident investigator Ken Saczalski has been trying to get the National Highway Traffic Safety Administraton (NHTSA) to require stronger seats since 1992, when he spoke to Ed Bradley on CBS's "60 Minutes."

"It's an inadequate standard. It's flawed as far as I'm concerned," Saczalski said during the interview. Years later, he says that still hasn't changed.

Auto safety regulator NHTSA's own researchers also warned of the issue in 1992, citing examples of "major or fatal injuries" when seat backs collapse.

The agency also had the results of crash tests - required for other safety standards -- which showed seat back collapses in 30-mph rear impacts. Despite that, NHTSA does not require similar tests for seat strengths.

NHTSA declined to speak to "60 Minutes," saying only that the agency was investigating ways to strengthen the standard. That was in 1992.

In 2000, then NHTSA administrator Sue Bailey told CBS News the agency would be looking into the seat back issue within a year.

"It's not appropriate that we are working off of 30-year-old standards," Bailey said.

But 15 years later, the standard remains the same as when it was written in the late 1960s, and the agency stopped looking into the issue in 2004.

Current NHTSA administrator Mark Rosekind didn't have time to sit down with CBS News in the past two weeks, and also declined to comment when we caught up with him on Capitol Hill.

"If they had changed the government standards to a point where the seat back wouldn't fail, we would still have a 6-year-old running around," said Liz Warner.

"How do I as a consumer know if I've got a strong seat or a weak seat?" said Alan Cantor. "There's no way of knowing as a consumer."

Liz and Andy Warner don't take any chances now. They make sure their three surviving children are buckled into the middle seat or third row, far away from front seats that could collapse.

"It's time for the automakers to stop being cheap and to fix this damn problem," said Andy Warner. "I'm sure everybody who buys a car would pay $50 more to make sure this doesn't happen to them. I know I would."

The Warner and Massie families settled their lawsuits against those carmakers. The automakers say their cars are safe, meet or exceed all federal safety standards, and have improved over the years.

Since CBS News began investigating, we have found nine children killed in accidents like the Warners' - more than the number of people killed by faulty Takata airbags.

For its part, NHTSA said it didn't have the data to support changing the standard. In a statement, NHTSA said:

"You know - or should know - that the laws we must follow on rulemaking are significantly different than those involving safety defects. We do not have to provide cost-benefit analysis for defect determinations. That's not NHTSA's choice. That's the law. If you choose to mislead your viewers by comparing apples and hand-grenades, that is not NHTSA's fault. That is yours and yours alone. And if in misleading your readers you create the false impression that these two situations are in anyway comparable, and discourage them from addressing a safety defect that could cost their lives or the life of someone in their family, then you're failing them. The Takata comparison is specious and misleading, it harms rather than helps safety, and you should remove it from the story."

"It's important to keep in mind the requirements NHTSA and other government agencies must follow as we promulgate regulations such as the Federal Motor Vehicle Safety Standards. Those requirements are contained in statutes such as the Administrative Procedures Act and in Executive Orders issued by the President. Of particular interest here is the requirement that in "significant" rulemakings (a specific designation in the law), we are required to demonstrate benefits, and to consider whether the costs of a regulation would outweigh the benefits. These requirements are in place to ensure that federal agencies to not impose requirements without providing careful justification.

NHTSA has considered changes to its seating standards for years. The agency recognizes that the current standard is decades old, and it has received requests and formal petitions over the years to amend or strengthen the standard. In 2004, after several years of research and analysis, the agency formally terminated a rulemaking proceeding aimed at changing the standard. The agency did so for several reasons, but fundamentally the decision rested on the difficulty of providing data, as opposed to anecdotal evidence, for safety benefits of a change to the standard. This is an enormous challenge because the kind of high-impact rear-end crashes that are generally cited as justifying a change are relatively uncommon. For example, rear-impact crashes account for roughly 3 percent of all traffic fatalities; fatal crashes in which seat failure occurs and results in injury or death are even less common. Bottom line: The absence of data demonstrating real-world benefits meant the agency could not pursue a rulemaking.

Since that decision, the agency has engaged in a number of activities related to the seating standard. The agency issued an upgrade to its standard for head restraints that took full effect in model year 2011. We are also have engaged in research to develop injury criteria for a new rear-impact test dummy, known as BioRID. This dummy, significantly more capable than previous models used in rear-impact tests, could help the agency develop comprehensive proposals to improve rear-impact protection for the traveling public.