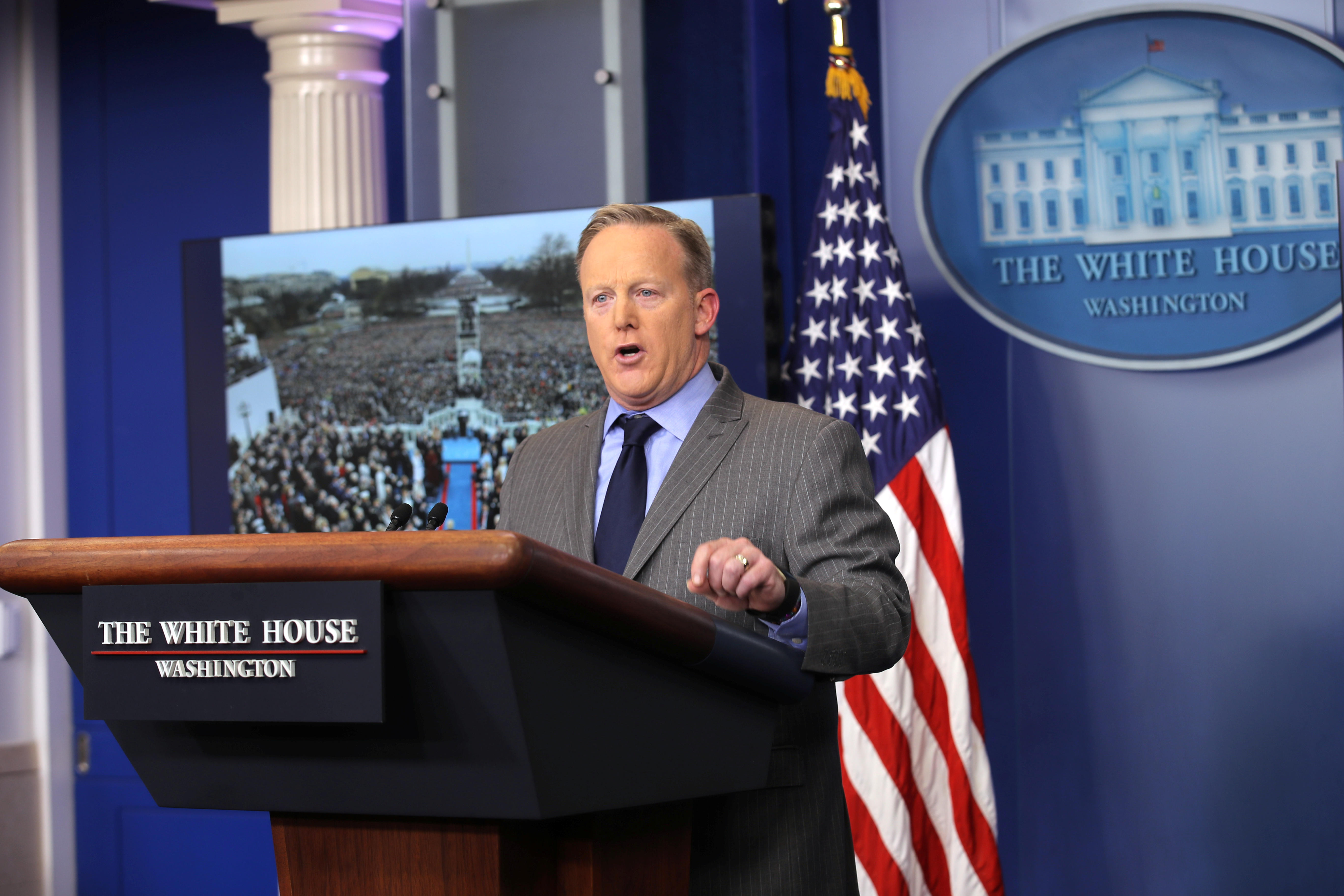 White House press secretary Sean Spicer came to the briefing room Saturday to chastise journalists for their coverage of attendance at President Trump’s inauguration before leaving the briefing room without taking any questions.

“Some members of the media were engaged in deliberately false reporting,” Spicer said, calling out two examples on Twitter of “inaccurate numbers involving crowd size” as well as reporting from a Time magazine journalist that a bust of Martin Luther King Jr. had been removed from the Oval Office.

“Inaccurate numbers involving crowd size were also tweeted,” Spicer said, his voice escalating in volume. “No one had numbers...because the National Park Service does not put any out.” He said the same applied to “any attempt to count the protesters today,” referring to the Women’s March on Washington that packed the National Mall area.

Despite the lack of numbers he cited, Spicer went on to assert “this was the largest audience to ever witness the inauguration period both in person and around the globe.”

“Photographs of the inaugural proceedings were intentionally framed in a way in one particular tweet to minimize the enormous support that had gathered on the National Mall,” Spicer said. He described what he considered unfair visuals from the event: “This was the first time in our nation’s history that floor coverings were used to protect the grass on the mall...That had the effect of highlighting any areas where people were not standing while in years past, the grass eliminated this visual.”

Later, Spicer blasted the reporting as “shameful” and “wrong,” calling them “attempts to lessen the enthusiasm of the inauguration.”

To reporters in the room, Spicer said Pompeo’s confirmation was “what you guys should be writing and covering.” Spicer vowed that the Trump administration would “hold the press accountable.”

At the briefing, Spicer also laid out the president’s upcoming schedule, mentioning that British Prime Minister Theresa May will visit the White House in the next week.

Earlier in the day, Mr. Trump complained at an appearance at the CIA about network coverage suggesting that his crowds were thin.

“I get up this morning, I turn on one of the networks and they show an empty field. I said, ‘Wait a minute, I made a speech,’ I looked out, the field was, it looked like a million, million-and-a-half people,” he told CIA staffers at a visit to Langley Saturday. “They showed a field where there were practically nobody standing there, and they said Donald Trump did not draw well.”

“It looked honestly, it looked like a million-and-a-half people, whatever it was, it was, but it went all the way back to Washington Monument,” Mr. Trump added. He took umbrage at some media coverage that suggested much lower numbers. “I get this network and it showed an empty field,” he marveled. “And it said we drew 250,000 people, now that’s not bad but it’s a lie.”  Mr. Trump claimed “the 20-block area all the way back to the Washington Monument was packed.”

Media coverage of the inauguration crowds relied on aerial photos of the two addresses from the opposite end of the National Mall to draw comparisons, with President Obama’s 2009 inauguration apparently drawing much denser crowds. Spicer made no reference of aerial photos in the briefing, using instead two photographs from behind the Capitol, an angle from which the disparity is not as clear.

Speaking to CBSN after Spicer’s statement, CBS News chief White House correspondent Major Garrett said: “It is quite clear that this administration will make whatever representations it wants to on its impression and interpretation of the news and drive that right back at the news media if it thinks it is being unfair or inflicting damage on the image this White House wants to display.”

“I’ve never seen anything like this where it was so intense, so harsh and passionate right off the beginning,” said Garrett. “So much of it was about what the media got wrong from the interpretation of this White House and a declaration that this antagonism is going to continue because this president feels duty-bound, on behalf of this movement that Sean Spicer spoke about, to speak beyond the media and criticize it whenever he is justified in doing so.”

On Friday evening, the National Park Service was ordered by the Interior Department to cease tweeting after a staffer retweeted a reporter’s comment on the sparser crowds that appeared to attend Mr. Trump’s inauguration.

About 30.6 million people watched the inauguration, according to the Nielsen ratings, a smaller number than the 38 million who watched Mr. Obama’s first inauguration in 2009.