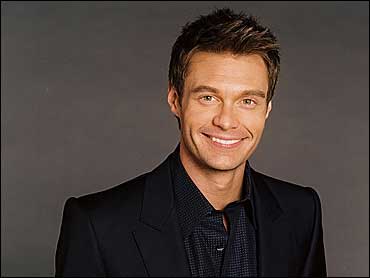 Ryan Seacrest is known as a lot of things: slick "American Idol" ringmaster, hotshot radio deejay, ubiquitous E! channel host. But funny guy's not one of them, which makes his scene-stealing cameo in "Knocked Up" such an amusing surprise. Even more so because he's the butt of the joke.

Seacrest sends up his pompous image in the Judd Apatow-directed comedy about an ambitious entertainment reporter (Katherine Heigl) whose life is flipped when she learns she is pregnant. She takes her job seriously at E! Entertainment Television but not as seriously as the film-version Seacrest, who launches into a riotous rant during a scene that lasts barely two minutes.

Seacrest, playing himself, becomes ticked off on the set when Jessica Simpson throws off his busy schedule by arriving at her leisure for an interview.

He angrily suggests that maybe he'll retaliate by asking for her thoughts on an "exit strategy" in the Middle East.

"I don't understand the young talent in this town," the movie Seacrest goes on. "It doesn't make any sense. I got four jobs. Hell, I'm more famous than half the people we talk to anyway!"

The rant then escalates into an R-rated diatribe with Seacrest dropping the F-bomb and denouncing the superficial workings of the entertainment industry. The apoplectic host finally has to be ushered into the green room with a promise of a cookie in an effort to calm him down.

Seacrest is not nearly as diva-like in real life ... or is he?

At the beginning of a recent telephone interview with The Associated Press, the 32-year-old took a moment to jokingly exercise his authority: "Hang on one second 'Linda, WHERE'S MY LUNCH?!' ... Sorry, just kidding," he deadpanned, back on the phone.

Seacrest, whose poker-faced demeanor during those ominous "Idol" elimination shows was spoofed recently on "Saturday Night Live," said he relished exposing his not-so-serious side in "Knocked Up."

He even suggested a headline for this story: "He's funny and YOU don't know it!" In the movie, he makes another statement: He can laugh at himself.

"I believe that one of the things I've tried to do is work hard and take the business very seriously. ... But, at the same time, you can't take the (TV personality) role too seriously. Then you really begin to lose it."

When it came time to film the scene, Seacrest was nervous about how he'd be "received by the movie world." He was delighted to "have fun and ad lib" with Apatow ("The 40 Year-Old Virgin"), who is big on improvisation and collaboration.

"I'm not used to a script," Seacrest said. Apatow, he related, asked him: "Hey, can you use a bad word and make fun of a couple people and, at the end of this whole scene, really make sure you make fun of yourself?"

"This was a very therapeutic exercise," he said. "I mean, I didn't want to stop that day. It's a shame I only got to do it for however long I got to do it."