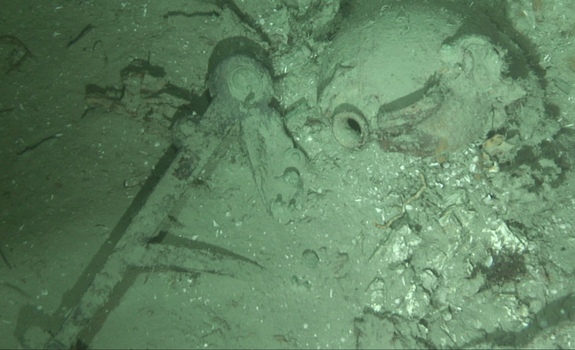 While searching for a mooring from a previous trip, researchers off the coast of North Carolina discovered a well-preserved shipwreck and artifacts that may date to the American Revolution.

A sonar scan in the area by the robotic autonomous underwater vehicle (AUV) named Sentry revealed a dark line and a fuzzy dark area. The scientists on the mission thought the anomaly could be the mooring they had been looking for from a 2012 expedition.

A dive to the spot, more than a mile deep, inside the manned submersible Alvin showed no such mooring. "Our accidental find illustrates the rewards -- and the challenge and uncertainty -- of working in the deep ocean," expedition leader Cindy Van Dover, director of the Duke University Marine Laboratory, said in a statement. "We discovered a shipwreck but, ironically, the lost mooring was never found."

The ship is resting in the Atlantic Ocean along the Gulf Stream, a warm current known by mariners who have used the route for centuries to travel to North American ports, the Caribbean, the Gulf of Mexico and South America, according to Duke University. As such, several shipwrecks have been found along the route. [See Photos of the Centuries-Old Shipwreck and Artifacts]

"The find is exciting, but not unexpected," James Delgado, director of the Marine Heritage Program (part of the National Oceanic and Atmospheric Administration), said in a statement. "Violent storms sent down large numbers of vessels off the Carolina coasts, but few have been located because of the difficulties of depth and working in an offshore environment."

Along with the wreck, the researchers spotted several artifacts, including red bricks that may have been part of the ship's hearth, nine glass bottles, possibly for beer or wine, and wooden ship timbers.

"We brought one of the wine/beer bottles to the surface and delivered it to the NC Maritime Museum for handling," said David Eggleston, director of NC State's Center for Marine Sciences and Technology.

For Eggleston, the most exciting find in the remains of the shipwreck was a navigational tool called a sextant. "For me it was the wooden sextant, which appeared in fantastic shape," he told Live Science in an email.

The team also found an unglazed ceramic jar, a metal compass and parts of an iron chain.

The researchers think the shipwreck dates to the late 18th or early 19th century, though further study is needed to pinpoint a true age.

Scientists with the Marine Heritage Program will now try to date and identify this lost shipwreck. The researchers are hopeful of finding out exactly what ship sank there.

"Lying more than a mile down in near-freezing temperatures, the site is undisturbed and well preserved," Bruce Terrell, chief archaeologist at the Marine Heritage Program, said in the statement. "Careful archaeological study in the future could definitely tell us more."

The expedition's main purpose was to study methane seeps. "We are finding amazing biological communities around the seeps, ranging from giant mussels that can be 100 to 200 years old or older, to giant tube worms that can be hundreds of years old as well, to a very strange-looking creature called a Chimeara, which is a distant cousin of sharks and rays," Eggleston told Live Science.