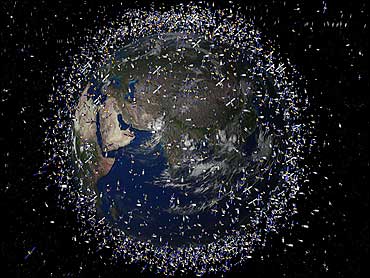 Scientists are keeping a close eye on orbital debris created when two communications satellites - one American, the other Russian - smashed into each other hundreds of miles above the Earth.

NASA said it will take weeks to determine the full magnitude of the unprecedented crash and whether any other satellites or even the Hubble Space Telescope are threatened.

The collision, which occurred nearly 500 miles over Siberia on Tuesday, was the first high-speed impact between two intact spacecraft, NASA officials said.

"We knew this was going to happen eventually," said Mark Matney, an orbital debris scientist at Johnson Space Center in Houston.

NASA believes any risk to the international space station and its three astronauts is low. It orbits about 270 miles below the collision course.

A spokesman for the Russian civilian space agency Roscosmos, Alexander Vorobyev, said on state-controlled Channel I television that "for the international space station, at this time and in the near future, there's no threat."

There also should be no danger to the space shuttle set to launch with seven astronauts on Feb. 22, officials said, but that will be re-evaluated in the coming days.

Nicholas Johnson, an orbital debris expert at the Houston space center, said the risk of damage from Tuesday's collision is greater for the Hubble Space Telescope and Earth-observing satellites, which are in higher orbit and nearer the debris field.

The collision involved an Iridium commercial satellite, which was launched in 1997, and a Russian satellite believed to be out of control, Matney said. The Iridium craft weighed 1,235 pounds, and the Russian craft nearly a ton.

Air Force Brig. Gen. Michael Carey, deputy director of global operations with U.S. Strategic Command, the agency responsible for space surveillance, said initial radar tracking detected some 600 pieces of debris, reports CBS News space analyst Bill Harwood. He identified the Russian spacecraft as Cosmos 2251, a communications relay station launched in June 1993, and said the satellite is believed to have been non-operational for the past 10 years or so.

"As of about 12 hours ago, I think the head count was up (to around) 600 pieces," Carey told CBS News Wednesday. "It's going to take about two days before we get a solid picture of what the debris fields look like. But you, I think, can imply that the majority of that should be probably along the same line as the original orbits."

There have been four other cases in which space objects have collided accidentally in orbit, NASA said. But those were considered minor and involved parts of spent rockets or small satellites.

At the beginning of this year there were roughly 17,000 pieces of manmade debris orbiting Earth, Johnson said. The items, at least 4 inches in size, are being tracked by the U.S. Space Surveillance Network, which is operated by the military. The network detected the two debris clouds created Tuesday.

Litter in orbit has increased in recent years, in part because of the deliberate breakups of old satellites. It's gotten so bad that orbital debris is now the biggest threat to a space shuttle in flight, surpassing the dangers of liftoff and return to Earth. NASA is in regular touch with the Space Surveillance Network, to keep the space station a safe distance from any encroaching objects, and shuttles, too, when they're flying.

"The collisions are going to be becoming more and more important in the coming decades," Matney said.

Iridium Holdings LLC has a system of 65 active satellites that relay calls from portable phones that are about twice the size of a regular mobile phone. It has more than 300,000 subscribers. The U.S. Department of Defense is one of its largest customers.

The company said the loss of the satellite was causing brief, occasional outages in its service and that it expected to have the problem fixed by Friday.

Iridium also said it expected to replace the lost satellite with one of its eight in-orbit spares within 30 days.

"The Iridium constellation is healthy, and this event is not the result of a failure on the part of Iridium or its technology," the company said in a statement.

Initially launched by Motorola Inc. in the 1990s, Iridium plunged into bankruptcy in 1999. Private investors relaunched service in 2001.

Iridium satellites are unusual because their orbit is so low and they move so fast. Most communications satellites are in much higher orbits and don't move relative to each other, which means collisions are rare.

Iridium Holdings LLC, is owned by New York-based investment firm Greenhill & Co. through a subsidiary, GHL Acquisition Corp., which is listed on the American Stock Exchange.