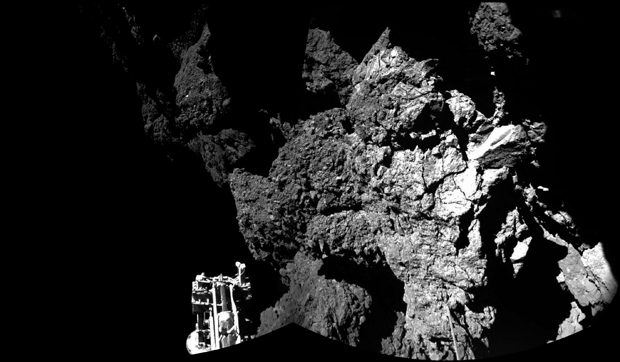 The European Space Agency's Rosetta spacecraft is beaming back high-resolution photos of Comet 67P/Churyumov-Gerasimenko this week that engineers hope will reveal the location of the Philae lander, the small robot that bounced off the surface Nov. 12 and tumbled into rugged, heavily shadowed terrain, project scientists said Wednesday.

Figuring out the lander's precise location and orientation will help scientists determine if and when Philae's solar panels might receive enough sunlight, as the comet moves closer to the sun, to recharge its battery and bring the hardy craft back to life for extended science observations. Lodged on its side in a jumble of icy slabs, rocky debris and nearby cliffs, Philae lost power and went into electronic hibernation three days after landing.

"I think within the team there is no doubt that we will wake up," he told reporters at the American Geophysical Union's Fall meeting in San Francisco. "And the question is OK, in what shape? My suspicion is we'll be in good shape."

The lander faces two major hurdles. Without power, and with most of the spacecraft in shadow, extreme cold could damage internal systems. And without a minimum amount of solar power, Philae's battery cannot charge and its computer system cannot restart. To resume science operations, an additional half-dozen watts will be needed.

"For the electricity, we need to have solar panels with a few watts, typically 5 watts, which is sufficient to reboot the system," Bibring said. "If we want to do (science) we need to have another 5 or 7 watts. So the question is how to get there?"

In April or May, 67P/Churyumov-Gerasimenko will be close enough to the sun to provide the intensity needed, engineers believe, but Philae could wake up earlier if gaps in the local terrain allows additional sunlight to reach its panels.

"We have done all we could with the data we have now," Bibring said. "We have reconstructed the trajectory, so we know, I think, the sort of area in which we should be, but then we need to have a precise understanding to reconstruct the local terrain model close to us to know where we are."

A pessimistic assessment indicates the lander might not wake up until after Easter. But conditions could improve much earlier, he said. "It really depends on how the sun will go over the local horizon. The total energy we need is something like 15 watts, which is less than what you have in your fridge (light)."

Rosetta's OSIRIS camera has completed a series of observations that should include the lander based on detailed analysis of data collected during and just after Philae's unexpected, multi-bounce landing, along with results from two earlier search campaigns. The images are in the process of being transmitted back to Earth.

"It's a bit like waiting for Christmas presents," said project scientist Matt Taylor. "That's basically the situation. I think the images have been taken, we're just waiting for them to come down."

OSIRIS Principal Investigator Holger Sierks said his team carried out two search campaigns on Nov. 24 and again on Dec. 6. But given the general area where they suspected the lander might have ended up, extensive shadowing resulted in just one candidate "but it was not significant enough to say yes, that is it."

Three more search campaigns were carried out Dec. 12, 13 and 14 and "we should find the lander in these images," Sierks said. "But it's half a billion kilometers to get the data down and it's first in, first out. So we'll have to wait for data to get down. Then the real search will start."

Rosetta began its 10-year 3.7-billion-mile odyssey on March 2, 2004, boosted into space by an Ariane 5 rocket. To reach 67P/Churyumov-Gerasimenko, the spacecraft had to carry out four planetary flybys, repeatedly using the gravity of Earth and Mars to boost its velocity enough to move out into deep space.

By the summer of 2011, the spacecraft was too far from the sun for its solar arrays to generate enough electricity to power all of its instruments and subsystems. At that point, flight controllers put the spacecraft into electronic hibernation, shutting down all non-essential systems. Finally, on Jan. 20, Rosetta woke itself up and on Aug. 6, the spacecraft matched orbits with 67P/Churyumov-Gerasimenko to begin a year-and-a-half of close-range observations.

On Nov. 12, the Philae lander was released for its long-awaited descent to the surface. The lander was equipped with two downward-firing harpoons and ice screws on its three landing legs designed to hold the craft down in the comet's feeble gravity.

But the harpoons failed to fire, the ice screws did not engage and Philae bounced off the surface, soaring through a huge arc before coming back down again two hours later. The lander then bounced away again, finally coming to rest lodged in rocks and apparently on its side, with one landing leg extending up toward space.

Frames from a panorama taken after it came to rest revealed a nearby cliff and a chaotic jumble of dark rock-like debris casting long shadows and allowing only minimal sunlight to reach Philae's solar cells.

Operating primarily on battery power, the lander dutifully carried out its programmed science observations, beaming data to the Rosetta mothership for relay back to Earth. Three days after touchdown, after an attempt re-orient itself to improve solar lighting, the lander dropped off line. It has not been heard from since.

While Bibring is optimistic his lander will wake up at some point in the months ahead, "we'll know only when we're there, so I cannot say more than that."

"We'll get prepared for a positive, (to) get out of hibernation," he said. "We do not see anything is broken. So really, the question is whether some of the electronics might suffer from the cold. We think most of the things outside already went through very low temperatures in hibernation (during Rosetta's voyage to the comet) and that worked very well."

And if Philae does manage to wake up, its shadowy landing site might offer an unexpected benefit. Had Philae landed on target and stuck to the surface, it would have been fully exposed to the sun and likely would have failed due to high temperatures in March or April, well before the comet reached perihelion when it will make its closest approach to the sun.

"Thanks to the shadows in which we are now, if we have survival we can go until after perihelion, I hope. And so that's why I call this Perihelion Cliff," he said, showing a photo of a rock-like wall that Philae snapped on landing day. "It's very important."