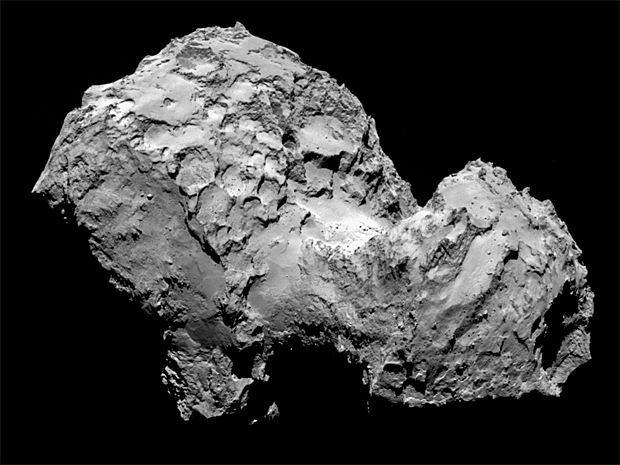 Scientists reviewing data from the European Space Agency's Rosetta spacecraft flying along with Comet 67P/Churyumov-Gerasimenko have concluded that asteroids, not comets, most likely delivered the lion's share of the water making up Earth's oceans, according to a paper published Wednesday in the journal Science.

The conclusion supports earlier observations that ruled out comets residing in the remote Oort Cloud as a source of Earth's water and indicates comets found closer to the sun in the Kuiper Belt, a population of icy relics born beyond the orbit of Neptune, likely formed in different places and somehow migrated to their current positions.

The conclusions are based on the observed ratio of deuterium, an isotope of hydrogen with one proton and one neutron in its nucleus, to normal hydrogen, with a nucleus made up of a single proton, in water molecules streaming away from 67P/Churyumov-Gerasimenko. For comets to be a source of Earth's oceans, the D/H ratio must match up.

"The Earth has a D/H ratio which is around three heavy molecules in 10,000 water molecules," Kathrin Altwegg, principal investigator with Rosetta's ROSINA instrument at the University of Bern, told reporters during a teleconference Tuesday. "It's very little, but it's very characteristic for the Earth."

During the solar system's formation some 4.6 billion years ago, extreme temperatures would have removed any water from Earth's surface but computer models indicate the planet was bombarded by asteroids and comets during its first billion years, Altwegg said, "so the question now is, who brought this water? Was it comets or was it something else?"

Based on earlier studies, including a flyby of Halley's comet in 1986, scientists decided that Oort Cloud comets could not be the source of terrestrial water. The deuterium-to-hydrogen ratio in water released from Halley, believed to have originated in the Oort Cloud, was twice that of seawater on Earth.

Planetary scientists subsequently gave up on the theory that comets seeded Earth's oceans during a period of heavy bombardment some 800 million years or so after Earth's formation, Altwegg said. Then, three years ago, ESA's Herschel Space Observatory observed a Kuiper Belt comet -- Hartley 2 -- during a close approach and remotely measured a D/H ratio almost exactly in line with Earth's.

"So the theory of comets delivering water was reappearing, but this time it was said that Kuiper Belt comets could have brought the water," Altwegg said. "Now with our new comet, 67P/Churyumov-Gerasimenko, where we can measure with Rosetta, we have a second Kuiper Belt comet and we were very much interested in what this comet would show."

Rosetta, launched in 2004, finally reached Comet 67P/Churyumov-Gerasimenko this past August, matching its velocity and slipping into a close orbit. The spacecraft dropped a small lander -- Philae -- to the surface Nov. 12 that bounced into shadowed terrain and lost power after sending back an initial stream of data. Rosetta, meanwhile, continues to operate normally, studying the comet with a battery of instruments as the two fall back into the warmth of the inner solar system.

As it turns out, a mass spectrometer in Altwegg's ROSINA instrument, analyzing water molecules streaming away from the nucleus, found a D/H ratio three times higher than what is found in water on Earth.

"Our results show that Churyumov-Gerasimenko is actually even much higher than all the Oort Cloud comets," she said. "It's probably one of the highest ever measured deuterium-to-hydrogen ratios, the most heavy water in any of the solar system bodies. And that now probably rules out Kuiper Belt comets as bringing the water on the Earth. So that's a new result.

"I think we have to conclude the following: first, terrestrial water was probably brought by asteroids more likely than comets, and secondly that the Kuiper Belt comets were probably not all assembled at the same location in the solar system, but they migrated in and out so that we have a mixture of comets in what we call today the Kuiper Belt."

Asteroids today have very little water, but early in the solar system's history, before being thoroughly baked by the sun, that likely was not the case.

The Earth, too, originally had water, but not on the surface.

"It's very well possible the Earth kept some of its water, not on the surface but maybe at the poles or maybe in the crust," Altwegg said. "That remains to be seen. ... We just know there were a lot of impacts in the early times, 800 million years after formation, and it's very likely some of the terrestrial water was brought at that time. The only bodies that are remaining (candidates) are asteroids, or asteroid-like bodies from the inner solar system, not from far out."

Matt Taylor, the Rosetta project scientist, said the spacecraft is in good health and executing its planned science observations while researchers and engineers study photographs of the comet in search of the Philae lander. The small spacecraft bounced on touchdown in the comet's feeble gravity and ended up in an unknown location.

Photographs from the lander show it is resting in rugged terrain, almost completely shadowed by surrounding cliffs and boulders. "One side of the lander appears to be in a hole, we see a leg sticking up, we can see a bit of the sky, we also see an overhanging cliff-like structure so it gives us an idea of what the local terrain is like," Taylor said.

The lander's solar panels are not receiving enough sunlight to recharge on board batteries and the spacecraft ceased operations a few days after touchdown. Data from a radio experiment indicates the lander ended up on the other side of the comet from its intended touchdown point somewhere in a strip "a few hundred meters by tens of meters," Taylor said.

"We are awaiting the opportunity to fit in some extra observations around the head of the (comet) to try to locate exactly where the lander is," he said. "Once we get the identification of where the lander is, it will give us a better fix on what we believe the illumination conditions are and a better idea of when we would expect the lander to have sufficient illumination to be able to start charging its batteries and come back on line."

Taylor said a back-of-the-envelope calculation shows the comet will be close enough to the sun in May to possibly revive the lander.

"Once we get a fix on the lander, that will enable us to do that more accurately and we'll see how that fits in with our plans," he said.

In the meantime, Rosetta continues its orbital dance with 67P/Churyumov-Gerasimenko and while the comet has not shown any increase in activity since the spacecraft arrived in August, Altwegg said scientists are hoping for a boost later this month or early next year as the comet warms up closer to the sun.

"We don't see actually any enhancement in the activity in the last three or four months," she said. "We hope that will change soon. Many comets exhibit a strong increase in activity once you are within 2.7 astronomical units from the sun (251 million miles). So that will be Christmas. So we expect a Christmas present, or shortly after maybe for the new year."