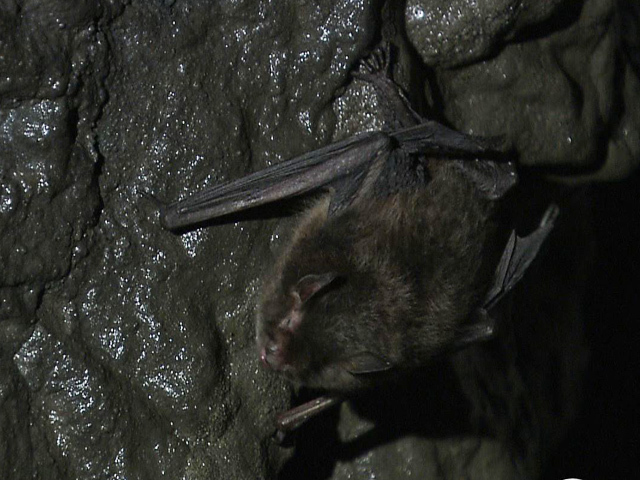 (CBS News) STEWART COUNTY, Tenn. -- Bats tend to get a bad rap around Halloween, but farmers love them because they feast on some of the pests that destroy crops. But now, a mysterious fungus is killing the bats by the millions.

In Tennessee, a cave is the winter home to 160,000 endangered gray bats that could be extinct within a decade from white nose syndrome.

"This is a wildlife disease that is unprecedented in our history," says Cory Holliday of the Nature Conservancy.

Scientists are still mystified by this fungus, which shows up as white powdery residue and disturbs the bats' natural sleeping pattern.

"Basically, it causes bats to use up energy they've stored during winter, and they come out of hibernation early -- before there is any food available and while it is still very cold -- and they don't make it through the winter," says Holliday.

"White nose" was first discovered in four caves in New York back in 2006. Now it's in 19 states and moving further west every year.

Researchers are doing everything from tagging bats to understand migration patterns to a project at Bucknell University in Pennsylvania, where 200 bats were intentionally infected with the fungus to try to develop a possible treatment.

Ann Froschauer of U.S Fish and Wildlife, which coordinates the patchwork of research programs, says going into a cave where bats have died is "pretty grim."

"You're looking in and it looks like a carpet of pine needles on the floor of the cave, except that you know it's not pine needles, it's bones," she says.

Cory Holliday and the Nature Conservancy are so concerned about the Tennessee gray bat that they're taking a dramatic $300,000 gamble: building a first-of-its-kind, man-made bat cave.

"The bats will come hibernate in the winter time," he says. "After they leave in the spring, we can go in and clean the fungus out of the artificial cave."

Scientists hope that by keeping the cave clean, they'll be able to slow the spread of the disease.

If it works, other artificial caves could be built elsewhere, which might help save hundreds of thousands o America's most endangered bats.