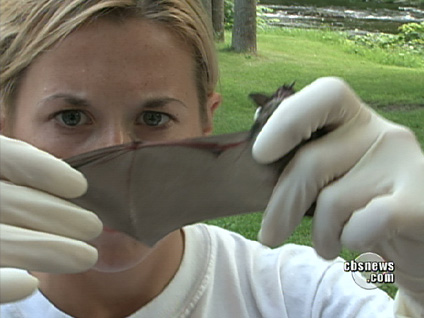 (AP) The mysterious deaths of millions of bats in the United States and Canada over the past several years were caused by a fungus that hitchhiked from Europe, scientists reported Monday.

Experts had suspected that an invasive species was to blame for the die-off from "white nose syndrome." Now there's direct evidence the culprit was not native to North America.

The fungal illness has not caused widespread deaths among European bats unlike in the U.S. and Canada. In North America more than 5.7 million bats have died since 2006 when white nose syndrome was first detected in a cave in upstate New York. The disease does not pose a threat to humans, but people can carry fungal spores.

It's unclear exactly how the fungus crossed the Atlantic, but one possibility is that it was accidentally introduced by tourists. Spores are known to stick to people's clothes, boots and caving gear.

White nose syndrome has killed bats in four Canadian provinces and 19 U.S. states, mostly in the Northeast and South. Last week, the illness marched west of the Mississippi River, infecting bats in Missouri.

Now that scientists have pinpointed the apparent origin of the epidemic, what can be done to protect bats? They play a crucial role in the ecological food chain by devouring insects.

"There is still not much we can do beyond making absolutely sure we don't make things worse by accidentally spreading the fungus," said biologist Craig Willis of the University of Winnipeg in Canada.

Willis and a team of U.S.-Canadian scientists set out to determine whether the fungus behind white nose syndrome was native to this continent or invaded from abroad. To do this, they collected 54 little brown bats from an uninfected cave in Manitoba.

The bats were divided into three groups: One group was infected with spores collected from Europe; another group was sickened with spores from North America. A third group was not infected. Researchers used infrared cameras to monitor the bats' behavior and disease progression over several months.

Both infected groups developed symptoms, including the telltale trace of white powder on the nose that gives the disease its name and scarring on the wings. Compared with uninfected bats, infected bats were roused more often from hibernation. This depletes their fat reserves and ultimately leads to death.

The findings were reported online Monday in the journal Proceedings of the National Academy of Sciences.

Since the infected groups showed similarly severe symptoms, scientists concluded the fungus originated in Europe. Had the pathogen been native to North America but with a mutation that made it more deadly, scientists would have expected to see milder symptoms in the group infected with the European fungus.

The team planned to repeat the experiment next year with European bats and compare results.

Why European bats have not died off en masse is unknown. It's possible they developed immunity to the fungus or learned to avoid places that favor the spread of the disease. North American bats have shown little protection against white nose syndrome and there's active research into whether populations can rebound.

"We are still working to understand if it is possible for bats to develop resilience or resistance to the fungus," said Jeremy Coleman of the U.S. Fish and Wildlife Service who had no role in the latest work.