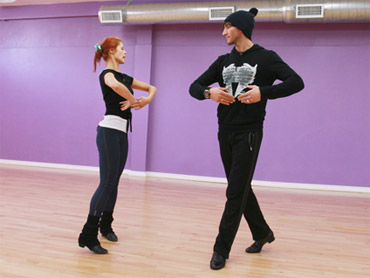 Scherzinger earned the highest score during Monday's premiere, 25 points out of 30, for a Viennese waltz that judge Bruno Tonioli called "a performance of sparkling finesse." Lysacek's waltz landed him in second place with 23 points.

Scherzinger and Lysacek are among 11 celebrity contestants vying for the mirrorball trophy on the 10th season of the hit ABC dance show.

Photos: "Dancing with the Stars"

Astronaut Buzz Aldrin earned the night's lowest score, collecting 14 points out of 30 for his cha-cha. The judges were reluctant to criticize the 80-year-old war veteran, whom host Tom Bergeron introduced as a "living legend," but Tonioli summed it up by saying: "It looked like you still had your moon boots on."

Other low-scorers Monday included soap star Aiden Turner, who earned 15 points for his cha-cha, and reality mom Kate Gosselin, who collected 16 points for her Viennese waltz.

All will dance again on March 29, and one will be cut from the contest on March 30.

Monday's episode also featured the debut of co-host Brooke Burke, who will share duties with Bergeron, and the return of judges Tonioli, Len Goodman and Carrie Ann Inaba.