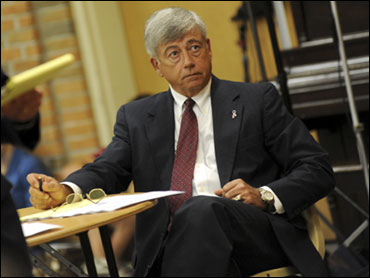 South Carolina Democratic Party officials on Thursday upheld a surprising U.S. Senate primary win by an unemployed military veteran, nixing a protest lodged by their favored candidate that could have required a new vote.

The party's executive committee decided there was not enough evidence of impropriety to nullify the June 8 election victory by Alvin Greene, a 32-year-old who lives with his father and waged no visible campaign against a former lawmaker.

Greene did not attend the meeting and nobody spoke on his behalf. Reached afterward by phone, he reiterated one of his few, common public statements about his candidacy.

"I am the best candidate in the U.S. Senate race in South Carolina. Let's stop my opponent from reversing forward progress in the United States and South Carolina," he said.

The move upholds the improbable win by Greene, who raised no money and didn't even have a campaign website. Democratic Party leaders intensified their scrutiny after The Associated Press reported Greene faces a felony obscenity charge and the candidate stammered through a series of awkward, terse news interviews. Some accused Republicans of having a hand in the election.

Greene Wants to Be Time's "Man of the Year"
CBSNews.com Special Report: Campaign 2010

Greene won with 59 percent of the vote and faces Republican Sen. Jim DeMint, who is considered a heavy favorite. Vic Rawl, the candidate who filed the protest, had 41 percent.

The party's 92-member executive committee made its decision after experts and voters testified for Rawl that questionable balloting statistics and problems with touch-screen voting machines indicated a corrupted final tally.

Duncan Buell, a computer scientist at the University of South Carolina, testified he had experimented on the same machines in previous elections and was able to trick them into selecting a candidate whose name he had not actually touched.

"I believe that these should be used with an enormous amount of skepticism," Buell said.

But committee members said they hadn't been presented with enough concrete evidence and could not overturn an election, no matter how much they wanted Rawl, a former lawmaker and judge, to win.

Some had speculated that Greene, who is black, benefited from an undercurrent of support from black groups.

A state lawmaker has suggested that black voters looking for a black candidate might have chosen Greene because of the spelling of his name, with an "e" on the end.

But the state's NAACP chapter says its leaders didn't even know about Greene's candidacy. And Walter Ludwig, Rawl's campaign manager, said Thursday that most registered South Carolina voters with that spelling are white, and Greene, who had did not attend state or county party conventions, did worse in heavily black counties, anyway.

"How would voters know Mr. Greene was black?" Ludwig asked. "He made no campaign appearances. He attended no Democratic events."

Rawl said he would not appeal the decision but did not answer other questions.

Among the suspicions raised about Greene is that he has failed to fully answer how he paid the $10,440 filing fee to run for office in March. He has said he saved up his military pay for two years but has refused to back it up with bank statements.

State Democratic Party Chairwoman Carol Fowler asked Greene to withdraw after AP reported he was arrested in November and charged with showing obscene Internet photos to a University of South Carolina student, then talking about going to her room at a university dorm. He has declined to comment on the charge, has yet to enter a plea or be indicted and says he's staying in the race.