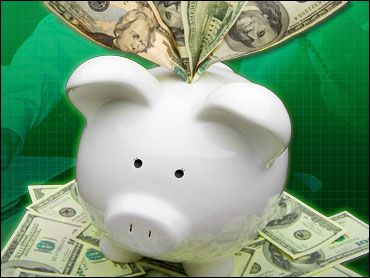 Americans once again spent everything they made and then some last year, pushing the personal savings rate to the lowest level since the Great Depression more than seven decades ago.

The Commerce Department reported Thursday that the savings rate for all of 2006 was a negative 1 percent, meaning that not only did people spend all the money they earned but they also dipped into savings or increased borrowing to finance purchases. The 2006 figure was lower than a negative 0.4 percent in 2005 and was the poorest showing since a negative 1.5 percent savings rate in 1933 during the Great Depression.

"It's a problem we ought to worry about, but it's not necessarily a calamity," Newsweek and Washington Post columnist Robert Samuelson told CBS Radio News.

"This negative savings rate is a recent shift. Only 10 years ago the savings rate was 4.5 percent. And 25 years ago, savings rates were in double digits," Peter Russo of Vanderbilt University tells CBS News.

People are spending because the economy has been so good, says Samuelson.

"Sooner or later, we think, the increases in value of the stock market and homes will not be great enough to reassure most Americans that they have enough savings, but right now, it hasn't stopped," he said. "It explains the continued strength of the economy."

The McGee family in St. Paul, Minn., may be a typical example. They're middle class — Brian McGee is a salesman of hair care products and Andrea McGee takes care of their two boys, reports CBS News correspondent Anthony Mason.

"We're not the Rockefellers, but we're doing just fine," says Andrea. "I'm surprised by how much money we're making. And I'm constantly asking myself 'Hey wait a minute, how come we're running out of money at the end of the month?'"

Like most Americans, the McGees are finding it harder and harder to save. In fact, Andrea has found herself dipping into savings to pay their bills.

"We've been saying for years that we need to sit down and make a budget," says Andrea, "but we haven't done it."

In other news, the Labor Department reported that the number of newly laid-off workers filing claims for unemployment benefits dropped by 20,000 last week to 307,000. That improvement pushed the four-week average for claims to the lowest level in a year, indicating that the labor market remains healthy.

The savings rate has been negative for an entire year only four times in history — in 2005 and 2006 and in 1933 and 1932. However, the reasons for the decline in the savings rate were vastly different during the two periods.

During the Great Depression when one-fourth of the labor force was without a job, people dipped into savings in an effort to meet the basic necessities of shelter and clothing.

Economists have put forward various reasons to explain the current lack of savings. These range from a feeling on the part of some people that they do not need to save because of the run-up in their investments such as homes and stock portfolios to an effort by many middle-class wage earners to maintain their current lifestyles even though their wage gains have been depressed by the effects of global competition.

Consumers are likely to save less and spend more as long as the economy is strong, says Samuelson.

"I think the main worry here is whether or not it will be an adverse effect on the economy if there is a shift towards more savings on the part of households and families," he said — that is, spending less.

The 0.7 percent rise in personal spending was the best showing since a similar gain in July. It followed increases of 0.5 percent in November and 0.3 percent in October and reflected solid spending by consumers during the Christmas shopping season.

Consumer spending posted a solid rebound in the final three months of the year, helping to lift overall economic growth to a rate of 3.5 percent during that period, up significantly after lackluster growth rates in the spring and fall.

Whatever the reason for the low savings, economists warn that the phenomenon exists at a particularly bad time, with 78 million baby boomers approaching retirement age. Instead of building up savings to use during retirement, baby boomers are continuing to spend all their earnings.

Incomes were up 0.5 percent in December, the best showing since a similar increase in September.

On the inflation front, a gauge tied to consumer spending that is preferred by the Federal Reserve edged up by 0.1 percent in December. This gauge, which excludes volatile food and energy prices, was up 2.2 percent over the past 12 months ending in December, still above the Fed's comfort zone of 1 percent to 2 percent.