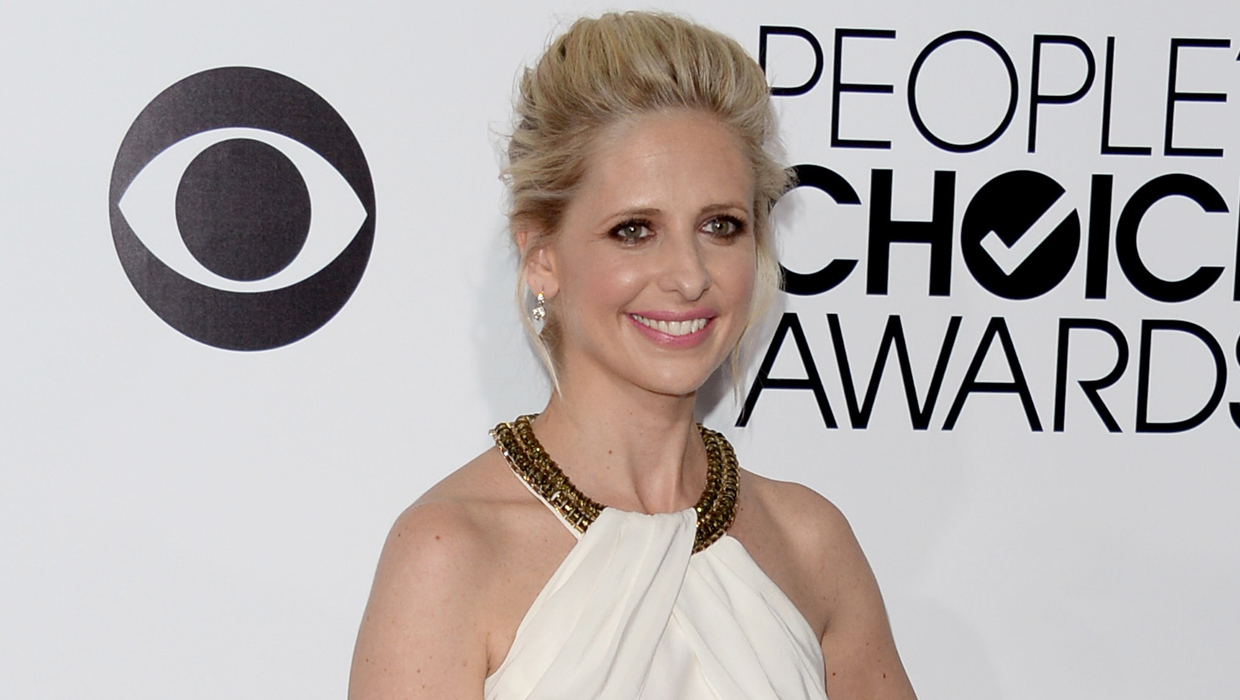 Sarah Michelle Gellar is having one crazy week.

She's in the midst of shooting the two-part season finale of CBS' sitcom "The Crazy Ones" and is gearing up to attend the Independent Spirit Awards on Saturday in Los Angeles. Not to mention she has two sick children at home.

But it's all in a day's work for Gellar, who recently scored a best People's Choice Award for favorite actress in a new TV series.

In the workplace comedy, Gellar, 36, portrays Sydney Roberts, the daughter of Simon Roberts (Robin Williams), a larger-than-life advertising executive who heads up a powerful agency but often displays some unpredictable behavior.

On Thursday's (Feb. 27) episode (in the new 9:30 p.m. ET timeslot), guest star Cheryl Hines will turn to an unlikely duo for help planning a bar mitzvah for her son (actor Joe West, who portrayed Kurt in last year's live "The Sound of Music" TV special.)

Gellar had a part in casting West in the show. "I watched 'Sound of Music' live, saw that kid -- and was like, 'That's our bar mitzvah boy.' We actually hired him. And he is a revelation -- just wait. He is amazing," Gellar told CBS News.

As for the rest of season 1, Gellar says viewers will finally get to meet Sydney's mother. "She's the first of Simon's many ex-wives, played by the amazing Mary Lou Henner," she said.

It will also feature a reunion of former "Mork & Mindy" co-stars Williams and Pam Dawber. "They're back together again for the first time in like 32 years," said Gellar. Dawber will portray a free-spirited author who goes on a date with Simon soon after his faith in love is shaken by the break-up of a couple close to him.

Meanwhile, Gellar's character is going to have a love interest -- and it's not Andrew (Hamish Linklater). But the former "Buffy the Vampire Slayer" star says that romantic interest will "stir up a lot of emotions with Andrew."

That all leads to the season finale this spring. "All I can say is maybe somebody finally in the Andrew-Sydney relationship might take a step forward," Gellar revealed.

With the show only in the middle of its first season, it's still unclear whether it will officially be picked up for a second. When asked if the uncertainty adds any pressure, Gellar said, "I think it exists in your fifth season. Even on 'Buffy' we thought that. At the same time, I think we're really finding the show. I think a lot of people see Robin Williams and they think it's going to be a Robin Williams shtick. But I think it truly is an ensemble -- and we have such amazing other castmates and we're going to focus on that. I'm hoping for a season 2. I think that's where we'll really find ourselves. That's what happened to us with 'Buffy' -- we really found ourselves in season 2."

One thing is for sure -- Gellar says she loves the cast and crew on the set of the David E. Kelley series. When her colleagues found out that she had recently teamed with Unilever Project Sunlight, they got right behind her and the initiative. Gellar will join Project Sunlight on the yellow carpet at the 2014 Film Independent Spirit Awards this Saturday, where she'll be sharing her stories of inspiration and celebrating other film stars who use their influence to inspire a bright future for children.

"I think at this point awards shows...are about jewels, dresses and shoes and manicures. It sort of lost the focus of what it's supposed to be about, which is supporting an industry that can do a lot," said Gellar.

It's the reason why she's joining the Independent Spirit Awards yellow carpet, which will stream live online. The goal? To encourage others to share their stories on sustainable living and how to make the world a better place.

Gellar, who has two children with actor Freddie Prince Jr., said that becoming a mother really changed her perspective on life and made her want to get involved in the Project Sunlight initiative. "You start thinking about the world in a different way. In your 20s everything is disposable...Before I had kids, you would open that box of tea and throw that box out. Now you use that box for a project," said Gellar, who has a garden full of vegetables they use for cooking at home.

"Being a parent is the greatest gift I've ever gotten. Everything I can do to be with my family that's I do," she said.

And that means running home to her sick kids after a full day of filming "The Crazy Ones."

"This is the best job I've ever had to give me the opportunity to be creative and to show my children good work ethic, " said Gellar. "Yet at the same time -- be there for the moments that I need to be there -- whether it's the first day of school, or a school pageant or having big chunks of time off. It allows me both. I'm really proud of the work that I'm doing."

Check out a sneak peek of Thursday night's episode of "The Crazy Ones":