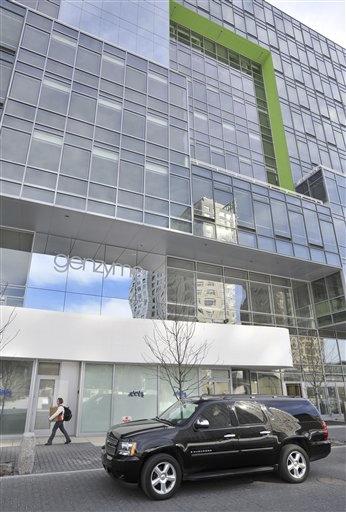 Sanofi, the world's fourth-largest drug maker, overcame Genzyme's reluctance to a takeover by raising its previous offer to $74 per share and agreeing to make additional cash payments pending the success of several drugs.

Wednesday's announcement comes after nearly nine months of back-and-forth between the two companies, with Sanofi-Aventis finally deciding Genzyme's portfolio of rare disease treatments was worth adding an extra $5 a share to its original $69 per share offer.

The combination seems odd at first: a huge French company best known for vaccines used by millions of patients each year, buying a Cambridge, Mass.-based biotech company whose drugs are taken by only a handful of patients around the world.

But experts say the merger reflects the landscape of the pharmaceutical industry, as companies seek to replace older medications that have lost their patent protection.

"There's a view among a lot of the pharma companies that biotech companies are particularly helpful in addressing the conundrum of patent expirations," said Adam Berger, managing director with investment bank Leerink Swann.

By the end of 2011, medications worth more than $30 billion in annual sales industrywide will begin competing with low-cost generic drugs. Many of these drugs, developed in the 1990s, treat common diseases like arthritis, diabetes and asthma. Sanofi's blood thinner Plavix, the second-best selling drug in the world, loses patent protection in 2012.

Compared with these pill-based drugs, Genzyme's high-tech injectable drugs are virtually immune to generic competition. Not only are they extremely difficult to manufacture, but they enjoy extra patent protections awarded to encourage development of specialty medications.

Genzyme's drug Myozyme, for example, is the only treatment for Pompe Disease, an often-fatal disorder that affects fewer than 10,000 patients worldwide. A year's supply costs $300,000 for adults. Other Genzyme treatments range from $100,000 to $300,000 per year.

Large pharmaceutical companies stayed away from these so-called orphan drugs for decades, in part because of the negative publicity associated with their high prices. Industry observers say that trend is likely to change.

"This is a starting point where we could see other companies that have specialty pharmaceuticals becoming more attractive to large pharma," said Jim Prutow, a consultant with PRTM Management Consultants.

The drought of new products has already spurred a string of mega-mergers, peaking with the 2009 combinations of Pfizer and Wyeth, Merck and Schering Plough, and Roche and Genentech.

"While the world was dealing with financial crises, credit contractions and lack of confidence, biopharma was doing deals at a record pace because of the acute need for new products," Berger said.

Sanofi-Aventis CEO Chris Viehbacher launched his hostile takeover bid for Genzyme last October, only to meet stiff resistance from Genzyme's founder and CEO Henri Termeer. The two sides eventually softened their positions, with Genzyme opening its books to share confidential data earlier this month, signaling a deal was near.

"Biotechnology had never really been embraced by Sanofi-Aventis in the past and I think that proved to be a weakness of the company," said Viehbacher, at a news conference Wednesday at Genzyme's headquarters.

Termeer will step down as chairman and CEO of Genzyme following completion of the deal, but will keep a consulting role as co-chairman with Viehbacher of an integration steering committee.

Genzyme's best-seller Cerezyme treats Gaucher disease, an enzyme disorder that can result in liver and neurological problems. Its second-best seller, Fabrazyme, treats an inherited disorder known as Fabry disease, which is caused by the buildup of a particular type of fat in the eyes, kidneys and nervous system.

The deal gives Genzyme shareholders one "contingent value right" for each share owned. These CVRs give holders the right to cash payments based on Genzyme meeting certain goals, including raising production levels for Cerezyme and Fabrazyme, getting final FDA approval for multiple sclerosis treatment Lemtrada, and higher sales targets.

Founded in the 1980s with a dozen employees, Genzyme grew into a biotech powerhouse in the 1990s after launching Ceredase, the first treatment for Gaucher's disease.

By 2008 the company employed 12,000 people and reported sales of $4.6 billion, but a series of manufacturing stumbles the following year left the company vulnerable to takeover.

In June of 2009, the company shut down its Allston, Mass.-based plant for about three months to clean up viral contamination that had been slowing production of Cerezyme and Fabrazyme. The virus was not harmful to people, but the shutdown was costly. Then, in November of 2009, the FDA said it found tiny particles of steel, rubber and fiber in drugs made by Genzyme.

By December, Genzyme's stock had fallen to $48 per share, down nearly 25 percent from the previous year.