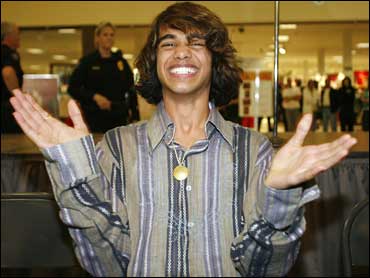 A couple of ousted "American Idol" finalists felt the love of their hometowns this week.

LaKisha Jones' shooting star fell from the "American Idol" galaxy Wednesday night, but on Thursday Flint continued to embrace her and the bright future it hopes for her.

Residents said Thursday they still are in Jones' corner, and store marquees, Internet blogs and even a highway billboard continued to scream out "LaKisha" in a swell of community pride.

And city leaders will honor her efforts.

A parade outside City Hall is planned, and Mayor Don Williamson will give 27-year-old single mother a key to the city. A local auto dealership owned by Williamson's wife, Patsy Lou, is kicking in a free six-month lease of a Buick Lucerne.

Flint Budget and Information Services Director Michael Townsend said Thursday that Jones has meant so much more to the community than just singing on a television show.

"This has really brought positive attention to Flint, and we've been so used to getting negative attention all of the time," Townsend said.

The city of about 120,000 people — like many in Michigan that once relied on the automotive industry — is trying to rebound from past economic woes.

The mid-1980s brought downturns in the industry with layoffs and plant closures, and the problems in this blue-collar city about 60 miles north of Detroit continue today.

So it was a pleasant change when crews from "Good Morning America" and "Access Hollywood" came to town to do features on Jones and her "American Idol" run, city attorney Trachelle Young said.

"There is such a spirit of hope that LaKisha has given the city. It's infectious," Young said.

City workers even volunteered on their off-time to hold miniature "Idol" rallies downtown on Tuesday nights prior to Jones' performances on the show.

Jones' appeal in her hometown crossed racial barriers. Flint is about 60 percent black, but Young estimated that about 75 percent of the 200 to 300 people at Tuesday "Idol" rallies were white.

"So many would not come to downtown Flint," she said. "LaKisha served as a catalyst to get people down here."

Meanwhile, in Federal Way, Wash. on Wednesday, teenage fans of Sanjaya Malakar, voted off the show three weeks ago, gave him an enthusiastic welcome home.

About 600 Idol fans shrieked, asked for autographs, invited him to their prom, and posed for pictures with 17-year-old Malakar at a Federal Way shopping center.

Amanda Reed of Federal Way — a city of about 84,000, 20 miles south of Seattle — waited for more than five hours with her mom and her brother to be first in line to get Malakar's autograph.

"She was like a kid before Christmas," Laurie Reed, Amanda's mother, told The News Tribune of Tacoma.

Malakar, accompanied by bodyguards, police officers and his mom and sister, signed 200 autographs, and mall officials passed out another 200 pre-signed autographs for each donation of $1 or more to World Vision, a Federal Way-based humanitarian organization.
By Corey Williams