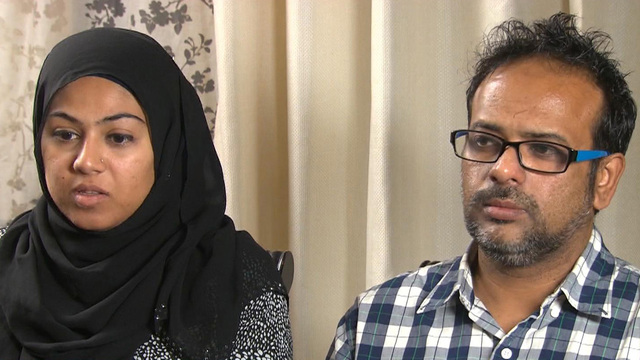 As investigators sort through evidence picked up at the San Bernardino shooting suspects' Redlands home, family members say they are in disbelief.

"I can never imagine my brother or my sister-in-law doing something like this. Especially because they were happily married, they had a beautiful 6-month-old daughter. It's just mind boggling why they would do something like this," suspected gunman Syed Rizwan Farook's sister Saira Khan told CBS News' David Begnaud in an exclusive interview.

Saira and her husband Farhan Kahn share the heartache felt by their community and their country. They can't believe someone so close to them could do something so horrific.

"There are people who can't fathom how a mother and father could drop their 6-month-old baby girl off and then go commit mass murder," Begnaud said.

"Yeah, we can't either," Saira responded.

"Does it make you angry?" Begnaud asked.

"Of course it makes me angry," Saira said.

"Absolutely. It makes us very upset and angry that how you can leave a 6-month-old daughter," Farhan added.

"And he put us in this predicament," Saira said.

U.S. officials tell CBS News that 28-year-old Farook started searching for a wife using an online dating website. He met Tashfeen Malik and they became engaged in 2013 after he traveled to Saudi Arabia during the annual pilgrimage know as the Hajj. Farook returned to Saudi Arabia in July 2014 to bring her to the U.S. She passed a Homeland Security counterterrorism screening as part of the vetting process, and officials tell CBS News Farook was not on any U.S. terror watch lists.

Christian Nwadike was shocked when he learned the man accused of gunning down over a dozen people turned out to be the coworker he sat only feet from for five years. He said Farook was different after he returned from Saudi Arabia.

"Do you believe that he was radicalized?" Begnaud asked him.

"Yes, by the wife. I think he married a terrorist," Nwadike said.

"He married a terrorist?"

A law enforcement source tells CBS News that the bombs found in the couple's home are near carbon copies of explosives shown in an issue of al Qaeda's on-line magazine "Inspire," which printed instructions on "how to build a bomb in the kitchen of your mom."

On behalf of their family, Farhan and Saira expressed their condolences.

"I want to say that we are deeply saddened by what took place and we can't imagine the loss that everybody has gone through, all the people who are injured or hurt badly...our thoughts and prayers are going out to them," Saira said.

Saira insists she has no idea what motivated her brother and his wife to go on a deadly rampage. She and Farhan are left wondering -- could they have stopped it?

"So many things I asked myself. I ask myself if I had called him that morning or the night before, asked him how he was doing, what he was up to. If I had any inclination, maybe I could have stopped it," Saira said.

"Did you see weapons in their home?" Begnaud asked.

"He had guns," Farhan said, "but he purchased from regular stores. Like handguns somebody would have."

On Thursday, an FBI evidence response team combed through Farook's rental home. Inside, they found more than 4,500 bullets, 12 pipe bombs and enough material and tools to build several more.

"Even I was surprised...that somebody can go and buy that much weapons," Farhan said.

Saira said her brother did not talk much.

"He was always shy and quiet," she said.

"She was also shy and quiet, kept to herself," Saira said.

Saira said she hasn't had time to process what's happened.

Farhan said he felt an obligation to address the victims on the night of the shooting.

"I wanted to go there and talk to the victims, people who were hurt... So I love this country, I love the people," Farhan said. "And I felt responsible to go and tell this to the people."

"Do you think your brother deserves to be forgiven?" Begnaud asked Saira.

"That's a hard question," she said. "I don't even know if I would forgive him. Just because of what he did."

Farhan said, right now, he could not forgive Farook.

"With what he did, no. What he did to his own family, to his daughter, to our family, to the innocent people there -- no. I wouldn't forgive him," Farhan said.