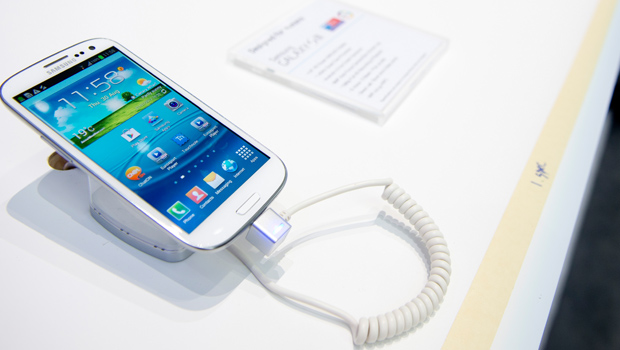 SEOUL, South Korea Strong sales of Galaxy phones propelled Samsung's quarterly profit to a record high, but its shares dropped Friday on the prospect its growth will slow in an increasingly crowded smartphone market.

The company's shares fell 2 percent in Seoul after the earnings announcement. Analysts said investors are worried that the widespread adoption of smartphones in developed markets and heightened competition from rivals could squeeze profit from the lucrative smartphone business. Samsung and Apple (AAPL) together account for nearly half of global smartphone sales.

The South Korean company, which raked in more than half of its profit and revenue from its mobile communications business, said its Galaxy S III and Galaxy Note II smartphones will help sustain its earnings momentum in the final quarter of the year.

Samsung also plans to act more aggressively to advance its share of the tablet PC market next year, its vice presidents Kim Hyun-joon and Robert Yi said at a conference call with investors.

"The tablet market is going through a very significant change," Yi, Samsung's head of investor relations, said at a conference call. The release of mini tablets that are between the size of smartphones and standard tablets could open up a new growth area next year, he said.

Apple, a leader in the tablet market, announced a smaller and cheaper iPad earlier this week, pitting its 7.9-inch iPad mini against small tablets from Amazon (AMZN), Google (GOOG) and Samsung. Samsung launched the Galaxy Note II, a giant-sized smartphone with a 5.5-inch screen and a digital pen, in the U.S. market earlier this week.

A slew of PC makers including Samsung launched tablet and laptop computers based on Windows 8 on Friday, as Microsoft introduced a major update to its operating system, allowing it to work on tablets and desktop computers. However, Samsung's head of investor relations said it was not clear if these new products will spur a huge increase in demand.

Operating profit surged 91 percent to an all-time high of $7.4 billion in the third quarter, in line with the company's preliminary results released earlier this month. Samsung is the world's largest maker of computer memory chips, mobile phones and TVs.

In the latest quarter, Samsung benefited from robust sales of its Galaxy smartphones as well as demand for high-end components for mobile devices, which offset weak global PC demand and a thin profit from its memory chip business.

Its mobile communications division that sells the Galaxy series of smartphones and tablet computers generated revenue of $24 billion.

Sales of the Galaxy S III smartphone topped 20 million handsets in little more than three months after its May 29 launch. Samsung said the Galaxy Note II, the latest iteration of the Note series, is expected to exceed the 10 million sales of its predecessor.

Kim, a vice president of Samsung's mobile communications team, said the company's smartphone sales saw "a substantial shipment growth" in China. Samsung, which is the largest smartphone seller in China according to IDC, did not disclose figures.

With the latest result, Samsung set a record-high quarterly operating profit for a fourth quarter in a row. But some analysts are skeptical whether Samsung will post another increase in profit in the final quarter of this year due to higher marketing costs.

Samsung said it will try to increase profit even if it faces heightened competition during the holiday season. In addition to its Android-powered Galaxy series, Samsung plans to release ATIV series smartphones based on Windows 8, the latest version of Microsoft's Windows operating system, before the end of this year.

The patent disputes between Apple and Samsung linger as another negative factor for Samsung's fourth-quarter earnings, although Samsung has sufficient cash reserves and earnings to cushion any impact.

Samsung is trying to reverse the decision in August of a San Jose jury to fine it $1 billion over copying Apple's design and technology for the iPhone and the iPad. The U.S. judge's decision may be issued as early as December.

The penalty could triple if the judge finds Samsung's act of copying was willful. But recent developments surrounding the patent disputes between Samsung and Apple, such as the U.S. patent office's initial ruling earlier this month to invalidate one of Apple's patents, could also scale back the penalty.