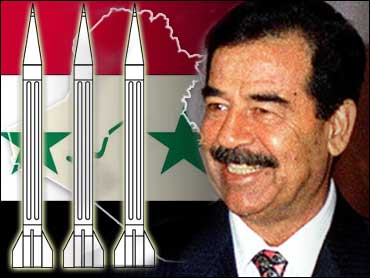 The rules are simple: you say what you're going to do without the intention of doing precisely what you say. Any nation in the world can join in. The current Grand Master of Bluff is, of course, Saddam Hussein. First he says he'll cooperate with the Weapons Inspectors, and then he doesn't. When you move troops in and we back you up he says he'll cooperate again, and this time he does – a bit, and then a teenzy bit more. But we all know he's Bluffing to the brink. And maybe he thinks we're Bluffing too.

But it's a mighty big Bluff to shift tens of thousands of soldiers right up to his border if we're not going to do what we say. Of course what we say is that we'd prefer the backing of the United Nations. Now this is where the Allied game of Bluff gets complicated. British Prime Minister Tony Blair needs another U.N. resolution. Otherwise his own Labour party will implode. Blair's bluff is to try to convince everyone else that a new UN Resolution is bound to get through. Trouble is Russia, France and Germany say they won't vote for it. No, they're much too clever at Bluff for that, they say they MIGHT not vote for it, which seems to leave a bit of room for last minute horse trading.

Bush and Blair have both said they're prepared to do the U.N.'s job for them – and start the war without its backing. So who's Bluffing? In this dangerous global game there are no clearly defined Good Guys. Britain and America have both bolstered up Saddam Hussein's regime in the past. France sold him a nuclear reactor, Russia helped him run his oilfields.

There are vested interests dictating what some nations will be saying in the next few crucial days. And where will they be saying it? At the United Nations, of course, which is the biggest verbal Bluff of all, because the UNITED Nations has so rarely been ....so DIS-united.