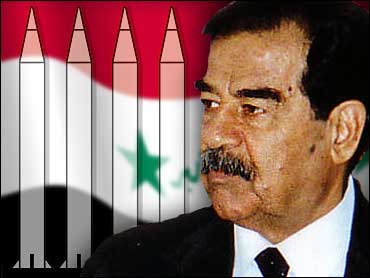 In an exclusive interview with CBS News Anchor Dan Rather, Saddam Hussein denied his al-Samoud missiles were in violation of U.N. mandates and indicated he will resist demands that he destroy them. He also challenged President Bush to a live broadcast debate on the looming war.

The al-Samoud 2 is at the heart of this week's dispute with the U.N. weapons inspectors. Chief inspector Hans Blix told Iraq it has until the end of the week to begin destroying the missiles. But the Iraqis have always said they don't violate the range limits placed on Iraq by U.N. resolutions.

But is the al-Samoud proper?

Saddam's response: "We do not have missiles that go beyond the proscribed range." He thereby strongly indicated Iraq would resist efforts to begin the destruction of the missiles as demanded by U.N. inspectors.

The three-hour interview with Rather was Saddam's first with an American journalist in a decade. The interview covered a lot of ground: what Saddam thinks about the American public, about Osama bin Laden, the Iraqi people, the dangers empires have historically faced in the Mideast – and whether or not he is prepared to die fighting or would leave his country.

Portions of the interview were to air Tuesday on The Early Show but Iraqi Television held up transmission of the tapes while they were translated. Rather will have more on the interview on Tuesday's CBS Evening News, and on a special edition of 60 Minutes II on Wednesday night at 9 pm EST, 8 pm CT.

On another front, Saddam had a surprising proposal for President Bush. He's challenging the president of the United States to join him in a live radio and television satellite linkup and debate the need for war before the entire world.

Iraqi officials have repeatedly noted the size and strength of the anti-war demonstrations that occurred ten days ago. They are certain they have an audience for the proposed debate.

"As leaders," the Iraqi president said to his American counterpart, "Why don't we use this opportunity?"

The White House clearly regards the debate offer as a ridiculous stalling attempt by Saddam. Spokesman Ari Fleischer told CBS News Correspondent Mark Knoller that it's "not a serious statement."

"This is not about a debate," Fleischer said. "This is about disarmament and complying with the world's instructions that Iraq disarm."

As for Saddam's denial of possession weapons of mass destruction, Fleischer said Saddam "is not facing reality on the issue of the al-Samoud missiles, why would his other statements have creditability?"

Iraq has until the end of the week to begin destroying the missiles, components and other related systems. If it fails to do so, that could give impetus to a draft U.N. resolution submitted Monday by the United States, Britain and Spain that would pave the way for war.

Rather says Saddam insisted in the interview that all the missiles he has, including the advanced al-Samouds, are within the limits set by the United Nations. "It's Saddam's contention, and he's sticking with it, that he's not going to destroy those missiles, not even going to promise to destroy them, because they are within U.N. guidelines.

Rather says he thinks Saddam knows that the time for the invasion is very near.

"He takes seriously what President Bush has been saying and he made it clear in the interview that he's prepared as he can get," Rather said.

While he says Saddam didn't describe war with the U.S. as "inevitable," it's very clear that he does expect war.

"He's hoping somehow, some way, that it doesn't happen," says Rather, "but he certainly expects it - and very soon unless something dramatic changes."