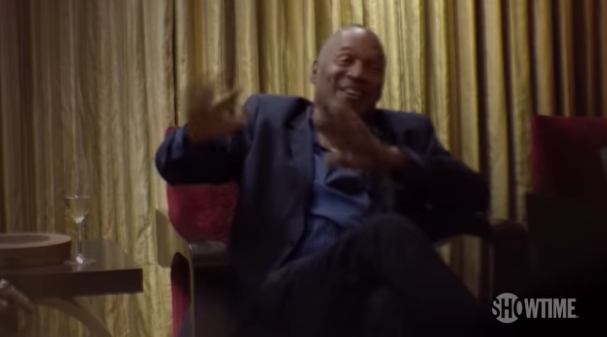 Though viewers were waiting to see Sarah Palin on Sacha Baron Cohen's "Who is America?" after the former Alaska governor said he "duped" her, that segment did not air on the show's season finale. Instead, the episode focused on O.J. Simpson, former Democratic Rep. Barney Frank and a group of Trump supporters. Palin was nowhere to be found, even though she revealed in July that Cohen's team tricked her into appearing on the show by calling the interview an opportunity to honor American veterans for what she called a "legit Showtime historical documentary."

On the season finale, Cohen, in character as Gio, a European TV host who has a show about the rich and famous, jokes with Simpson that the two of them were both "ladykillers." Gio explains to his girlfriend Christina that Simpson, who he calls a "women's rights activist," was a Buffalo Bill and appeared in the "Naked Gun" films. But when his girlfriend still doesn't remember who Simpson is, Gio makes stabbing motions to jog her memory.

"She knows that, oh Jesus," Simpson says as he laughs. Christina leaves the set and Simpson calls her "gorgeous."

Gio responds, "She's gorgeous but sometimes I want to kill her. I want to send her on a private helicopter and throw her over the Grand Canyon — oopsie daisy!" He gives Simpson a high five, and Simpson laughs and says, "Stop." The two joke about Christina going bungee jumping with a cord that's too long.

Gio asks to be introduced to Simpson's defense lawyer, Johnnie Cochran (who died in 2005), and Simpson says, "I would have to introduce you in the afterlife." Gio asks, "You didn't kill him too, did you?" and Simpson laughs again, saying, "Stop."

Gio then asks Simpson to tell him "how you got away with it," referring to the death of Simpson's ex-wife Nicole Brown Simpson, and the former NFL player says, laughing, "No, I didn't kill nobody."

In another segment on the show, Cohen disguised himself as Trump supporter Dr. Billy Wayne Ruddick Jr. Ph.D. to troll former Congressman Barney Frank, telling the outspoken Democrat that the infamous "Access Hollywood" tape had been edited in a conspiracy against President Trump and that Hillary Clinton took part in "pizzagate." Frank walked off the set.

Cohen also brought back his character Erran Morad, Israeli military expert, who met with three Trump supporters who were competing to help Morad fight antifa. He trained them to disguise themselves as liberals by teaching them storylines from the HBO show "Girls" and the cooking time of quinoa. Morad also asks them to simulate sex with a Trump dummy.

You can see the trailer for the season finale below. "Who is America?" airs on Showtime, a division of CBS.