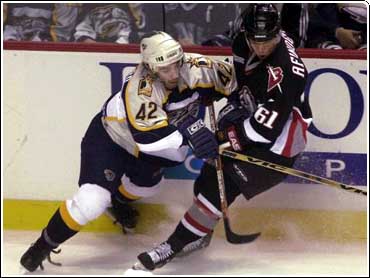 Jason Woolley came through for the Buffalo Sabres when it mattered most.

The veteran defenseman scored on a deflection with 51.8 seconds left in overtime, and the Sabres beat the Nashville Predators 2-1 Thursday night.

Seven of Woolley's 40 career goals have been game-winners.

"When you need an offensive spark or a big goal, a few guys step to the plate," Sabres center Erik Rasmussen said. "We're do or die for the playoffs. We're playing like we have to play hard and gritty."

"Jason is a guy who just is very confident in himself," Buffalo captain Michael Peca said. "He doesn't become flustered in important situations."

Vaclav Varada got the game's first goal at 11:50 of the second period when he fired a hard wrist shot from between the circles past Vokoun.

Ville Peltonen tied it 1-1 just 1:07 later to snap a personal 32-game goal drought. Peltonen took Scott Walker's backhand pass, stickhandled around Hasek and beat him with a backhander in close.

Buffalo's Vladimir Tsyplakov hit the post on a 4-on-2 near the end of the second. In the third, Hasek stopped Vitali Yachenev on a slap shot from point-blank range with 6:20 left and Bill Houlder from the right point moments later.

In overtime, Predators defenseman Drake Berehowsky hit the post with a power-play blast before Woolley scored.

"It's a tough way to lose in overtime," Nashville center Greg Johnson said. "That's the way it goes. We had our chances. We played well, we battled, we ran into a great goaltender."

Dominik Hasek, who returned last week after missing 40 games with a groin injury, appeared in just his 12th game, but second in three nights. The five-time Vezina Trophy winner hasn't played less than 58 games in a full season since 1992-93, his first year with the Sabres.

"I like to be on the ice. I like to stop the puck, and feel this winning feeling," said Hasek, who said last July that he would retire after the season, but says he will postpone that decision until the end of this season.

Nashville's Cliff Ronning banged a shot off the right post in the scoreless first period.