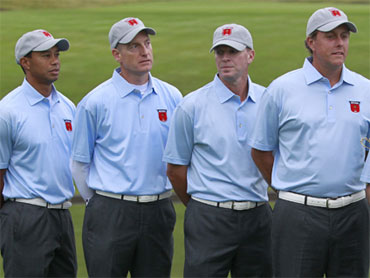 (CBS/AP) Remember the ill-fated pairing of Americans Tiger Woods and Phil Mickelson, the one that went down in flames at the Ryder Cup four years ago?

"Oh, yeah, I think there's a great chance," Mickelson said Wednesday, sarcasm practically dripping from every word. "Why don't you just hold your breath and we'll see till Friday."

With two days left before the matches begin, indications are that U.S. captain Corey Pavin will put Mickelson, currently No. 2 in the world, with long-hitting Dustin Johnson. Woods is almost certain to play with Steve Stricker, an unbeaten tandem at the Presidents Cup.

"Because of that record, I think that partnership should not be split up. Now, granted, that was on U.S. soil, it wasn't against Europe and now we're playing Europe on their home soil. It's going to be a much more difficult task, but," Mickelson added a moment later, "I would be surprised to see those two split up."

Don't expect Mickelson and Woods to be paired off the course either. U.S. teammate Hunter Mahan told AFP that the golfers will never be friends.

"Their personalities are completely different," the Californian told AFP. "Tiger is very, just, stoic and doesn't really talk much, and I know Phil, he talks to Bones (his caddy) on every shot and they really talk a lot in depth. Phil, I think the more he talks and chit chats, it calms him down. He likes that."

Mahan continued: "I would never expect them to be friends. After meeting them and talking to them and how they go about their business, they are just totally different. It is what it is and they are both going for the same thing usually every year, to be the best player in the world."

As for his own pairing, Mickelson and Johnson have built up a mutual-respect society based on some high-stakes practice rounds together. Those started shortly after Johnson made it through the PGA Tour's qualifying school three years ago, and have turned into a sometimes-expensive game of can-you-top-this?

And not only does Johnson's fearlessness intrigue Mickelson, he thinks the youngster's length and accuracy off the tee is a big advantage for any partner.

"He could be the straightest driver I've ever seen. Now, granted, he's hitting the ball longer than just about anybody on tour, but if you take the percentage of degree off line, he's probably as straight or straighter than anybody else on tour.

"But he's also 40 or 50 yards ahead of where the guys are that are leading driving accuracy," Mickelson said. "I think that he would be a great partner for me either way."

It's been a strange year so far for Lefty, bookended by winning his fourth major at the Masters in April and a disappointing tie for 22nd among the 30 players who qualified for the season-ending Tour Championship. In between, as both wife Amy and his mother continued their recovery from bouts with cancer, Mickelson let several chances to overtake Woods at No. 1 in the world slip through his fingers.

But for the first time since that inspirational win at Augusta, Amy Mickelson is scheduled to watch her husband play at Celtic Manor. In the meantime, Mickelson has filled up his time with practice sessions on the course and across a pingpong table from Woods in the team room.

"We've hit it back and forth, but nothing fierce yet. Our competition is Sunday night. We play a best of five series and so far, just like the U.S. team is holding the Ryder Cup," Mickelson said with a wink, "so am I in our little match."

Woods and Mickelson had been Ryder Cup teammates three times before, but never played together until then-U.S. captain Hal Sutton paired them on opening day at Oakland Hills.

"They could be one of the greatest teams ever in American history," Sutton said at the time. "They could shoot 58 tomorrow, if it gets that far. I'm a sportsman just like the rest of y'all. I want to see it."

But what followed left the U.S. team covering its eyes. Mickelson and Woods lost both matches that day and neither completely recovered. Mickelson has gone 1-6-2 since.

"Win or lose, the Ryder Cup has been nothing but an incredibly positive experience," he said. "I certainly would like to improve on our record. I mean, the U.S. has not played as well as we would like, but we were able to pull off a win in the last Ryder Cup.

"We are currently holding the Ryder Cup and we brought it over here to show you what it looks like," Mickelson said to laughter. "We are going to be fighting hard to bring it home."