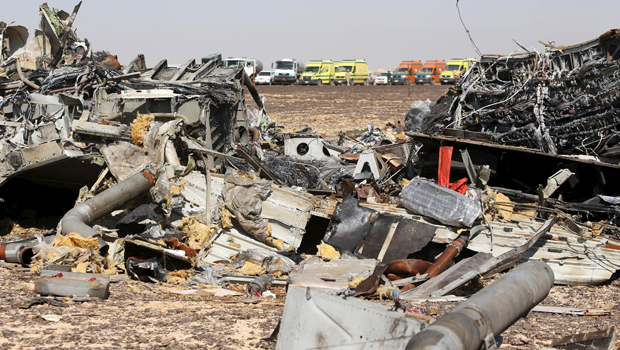 CAIRO -- International passengers departing Egypt's Red Sea resort of Sharm el-Sheikh continued to line up for flights on Sunday, as the first of three teams of Russian inspectors was dispatched to the country to examine airport security following the Oct. 31 airline disaster.

The Russian flight's crash in the Sinai Peninsula that killed all 224 people onboard continues to generate fallout, after the Islamic State of Iraq and Syria (ISIS) claimed responsibility for its downing and U.S. and British officials say intelligence shows it was likely brought down by a bomb on board.

Britain and several airlines have stopped normally scheduled flights to the resort, while Russia has suspended all flights to Egypt because of security concerns.

The FBI has offered assistance to Russia and Egypt and "stands ready to assist," FBI spokesman Joshua Campbell told CBS News on Wednesday.

The Russian and Egyptian governments have not accepted forensic investigatory help from the FBI, CBS News has learned. The Russians have asked about the intelligence they have been reading about in the U.S. media that points to a bomb on the plane. The U.S. is cooperating, though it is not clear what the U.S. is sharing.

Britain's foreign secretary said Sunday airport security in many cities will need to be overhauled if it is confirmed the Russian plane crash in the Sinai was caused by a bomb planted by the Islamic State of Iraq and Syria (ISIS) or someone inspired by the militants.

Foreign Secretary Philip Hammond warned that if those suspicions are true, there needs to be a rethink of security at airports in areas where the extremist group is active.

Russian Deputy Prime Minister Arkady Dvorkovich did not give details on what specific security issues the inspections teams would be examining. Dvorkovich said that 11,000 Russians were flown home from Egypt on Saturday and an even larger number were expected to leave Sunday, according to Russian news agencies.

Security officials at the Sharm el-Sheikh airport have told The Associated Press that the facility has long had gaps in security, including a key baggage scanning device that often is not functioning and lax searches at an entry gate for food and fuel for the planes. One security official said drugs and weapons slip through security checks at the airport because poorly paid policemen monitoring X-ray machines can be bribed.

A spokesman for Egypt's Aviation Ministry, Mohamed Rahma, dismissed the accounts of inadequate security, saying "Sharm el-Sheikh is one of the safest airports in the world," without elaborating.

Egyptian authorities have bristled at the allegations of lax security, with some blaming an anti-Egypt bias in the foreign media. Those sensitivities were on display Sunday as foreign camera crews were prevented from filming inside the Sharm el-Sheikh airport, along the city's main tourist strip in Naama Bay, or in other public spaces.

Despite strong government denials, the suggestions of a major security breach at Sharm el-Sheikh airport have gained traction among some Egyptians. On Saturday an Associated Press reporter at Cairo airport witnessed several passengers yelling at security personnel to pay more attention to the X-ray scanner, with one man repeatedly shouting, "This is what happened in Sharm!"

Meanwhile, the Mideast region's biggest airline, Emirates, said it was reviewing its security procedures in Egypt but remains committed to maintaining flights to Egypt, calling it "an enormously important market."

In Russia, more than a thousand mourners packed into the landmark St. Isaac's Cathedral in St. Petersburg for a memorial service for the victims. Attendees lit candles and stood in silence as the cathedral bells rang 224 times to remember each victim.

"We came to the service today with all our family to support the people in our common grief," said Galina Stepanova, 58.

Stepanova said she believed the plane was downed by a bomb, but said that Russia should continue its airstrike campaign against the Islamic State of Iraq and Syria group and other insurgents in Syria.

"We have a rightful cause to help Syria in its fight against terrorism," she said.

Mikhail Vishnyakov, a 42-year-old sales manager who attended the service with his family, said he did not want to rush to conclusions about the cause of the plane crash until the investigation was complete.

"If it was a terrorist act, I don't think it was directed exactly against Russia. It could well be directed against any other plane of any other country. It was for a good reason that other countries began to take their tourists from Egypt," Vishnyakov said.