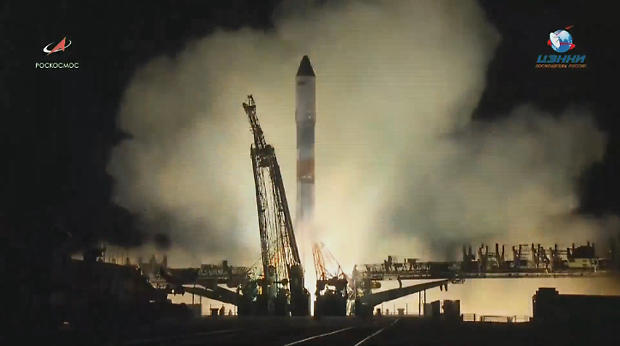 A Russian Soyuz FG rocket, identical to one that malfunctioned during launch last month and forced a space station-bound crew to execute a dramatic abort, successfully boosted a cargo ship into orbit Friday. The launch clears the way for resumption of crewed flights next month.

With its engines throttled up to full thrust, the Soyuz rocket, carrying a Progress cargo ship loaded with 2.8 tons of supplies and equipment, blasted off from the Baikonur Cosmodrome in Kazakhstan at 1:14 p.m. EST (GMT-5; 12:14 a.m. Saturday local time), climbing directly into the plane of the space station's orbit.

Two minutes after liftoff, the four liquid-fueled strap-on boosters making up the rocket's first stage were jettisoned as planned and the flight continued under the power of of the Soyuz FG's central second stage. The third stage then took over, boosting the Progress MS-10/71P supply ship into its planned preliminary orbit about eight minutes and 45 seconds after liftoff.

The Oct. 11 abort was blamed on a malfunction in the system used to jettison one of the four first-stage boosters. The strap-on crashed into the rocket's central core stage, triggering a computer-orchestrated emergency abort for Soyuz MS-10/56S commander Alexey Ovchinin and NASA astronaut Nick Hague.

Both men landed safely about 250 miles from the Baikonur Cosmodrome launch site, but Russia's workhorse Soyuz rockets were grounded while engineers sorted out what went wrong.

The problem was quickly traced to a bent, or deformed, mechanism in the separation system. No details were provided, but engineers examined downstream rockets to make sure the separation systems were in good shape and properly installed. They then pressed ahead with three successful launches of non station-related payloads.

The Progress cargo ship launched Friday was perched atop the same model booster used for space station crew launches. The flight was viewed as a final demonstration proving the Soyuz FG booster is once again ready to safely carry cosmonauts and astronauts to low-Earth orbit.

In a recent interview with CBS News, McClain said she had full confidence in the Russian booster that will propel her to orbit.

"The Soyuz rocket has an amazing track record," she said in a satellite interview from Moscow. "A launch has not been aborted since 1983, and that was a pad abort where the whole rocket kind of erupted in flames. And the crew successfully landed and went off to fly again.

"Going to space is not easy. The crew in October was lucky. But so is every crew that has flown in space over the last 50 years, 60 years. I'm very familiar with the rocket and with the redundancy of their systems and with their safety systems. And I'll be frank with you, I would have gotten on a rocket the day after that (abort) happened."

McClain and her crewmates will be welcomed aboard the station by Expedition 57 commander Alexander Gerst, Soyuz MS-09/55S commander Sergey Prokopyev and NASA physician-astronaut Serena Auñón-Chancellor. They were launched to the station June 6 and have had the lab to themselves since the departure of three other crew members Oct. 4.

On Saturday, Northrop Grumman plans to launch an Antares rocket from Wallops Island, Virginia, carrying a Cygnus cargo ship loaded with 7,385 pounds of equipment and supplies. Liftoff from pad 0A is targeted for 4:01 a.m.

The Progress MS-10/71P vehicle is scheduled to arrive at the station Sunday around 2:30 p.m., autonomously docking to the aft port of the Russian Zvezda module. The Progress is loaded with 1,653 pounds of propellant for space station orbital adjustments, 165 pounds of pure oxygen and air, 970 pounds of water and 2,866 pounds of spare parts and equipment.

If all goes well, the Cygnus supply ship will arrive Monday around 5:20 a.m., pulling up to within 30 feet and then standing by while Auñón-Chancellor, operating the lab's robot arm, locks onto a grapple fixture.

From there, flight controllers at the Johnson Space Center in Houston will pull the Cygnus in for berthing at the Earth-facing port of the central Unity module. Among the supplies for the crew are fresh fruit and ice cream, treats that will go well with Thanksgiving fare already on board.

A third resupply mission, this one using a SpaceX Falcon 9 rocket and Dragon cargo craft, is scheduled for launch Dec. 4, the day after Kononenko and his crew arrive on board station.

Gerst, Prokopyev and Auñón-Chancellor are scheduled to return to Earth on Dec. 20, wrapping up a 196-day mission. Expedition 58 commander Kononenko, Saint-Jacques and McClain will have the station to themselves until April when another Soyuz carries another set of crew members to the lab.