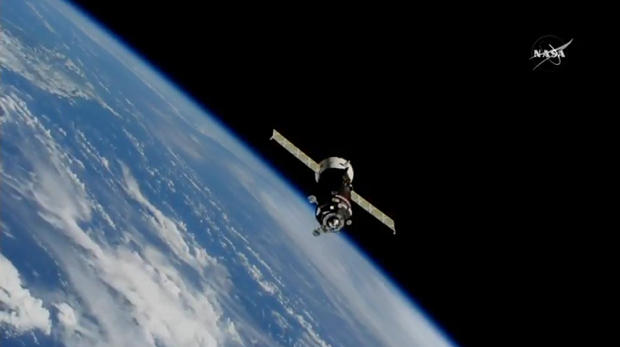 An unpiloted Russian Progress supply ship loaded with 2.8 tons of supplies and equipment blasted off from Kazakhstan and shot into orbit Monday and caught up with the International Space Station less than four hours later, a record run expected to pave the way for similar fast-track crew ferry flights when orbital mechanics permits.

Speedier flights will provide welcome relief to station-bound cosmonauts and astronauts who have traditionally spent up to two days, or 34 orbits, cooped up in cramped Soyuz ferry ships carrying out more leisurely rendezvous procedures.

In 2012, the Russians began testing procedures cutting that down to four orbits, or about six hours, and the new technique shaves off another two hours or so.

The Russians attempted such an abbreviated rendezvous on the two most recent Progress launches but in both cases, delays were ordered because of unrelated issues in the final moments of the countdown. Because of complex orbital constraints -- a variety of launch-day specific conditions must be met -- both spacecraft eventually used more traditional two-day approaches.

But the third time was the charm Monday, the countdown ticked smoothly to zero and the Progress MS-09/70P spacecraft thundered to life at 5:51:34 p.m. EDT (GMT-4; 3:51 a.m. Tuesday local time) and climbed away from the Baikonur Cosmodrome.

At the moment of launch, the International Space Station, streaking through space at nearly five miles per second, was 370 miles to the southwest of Baikonur. Fifty-nine seconds after liftoff, the station passed 260 miles directly above the launch site.

The station quickly leap-frogged ahead of the Progress and by the time the cargo ship separated from its third stage booster eight minutes and 45 second after takeoff, the lab complex was 1,004 miles ahead with both spacecraft in the same orbital plane.

The exact timing of the launch, the distance between the supply ship and the station when the Progress reached space and the precise orientation of their orbits were critical to enabling the two-orbit rendezvous.

But all that went by the book and the Progress caught up with its quarry after a series of carefully timed rendezvous rocket firings to adjust the supply ship's altitude, gliding to a docking at the Earth-facing Pirs module at 9:31 p.m., just three hours and 39 minutes after launch.

"I think it finally worked out for us," he said in translated remarks. "This is very promising in support of our upcoming plans, both for the current programs and the programs of the future. Definitely a giant step forward."

Someone, possibly one of the cosmonauts, then added "we've been waiting for this milestone for a long time, and hopefully this will become rule of thumb from here on out."

The Progress delivered 1,168 pounds of propellant to help maintain the station's orbit, 3,450 pounds of dry cargo, crew supplies and spare parts, 114 pounds of oxygen and air and 926 pounds of water.

Two U.S. cargo ships also are attached to the station -- a SpaceX Dragon capsule that arrived July 2 and a Northrup Grumman (formerly Orbital ATK) Cygnus spacecraft that arrived in May.

The Cygnus, scheduled to depart July 15, will be used Tuesday for a test to find out whether the U.S. spacecraft can be used in the future to raise the station's altitude, a task normally performed by Russian thrusters or by attached Progress spacecraft.

For Tuesday's test, the relatively small main engine of the Cygnus will be fired for 60 seconds, raising the station's orbit by just 360 feet or so. Engineers will study the stresses and loads imparted by the burn to determine if Cygnus spacecraft can be used in the future for more routine orbit-raising maneuvers.