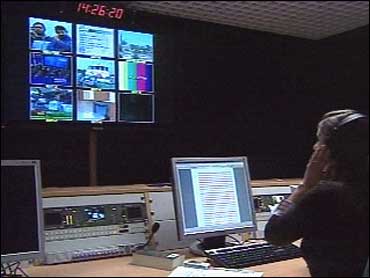 Tired of American TV? Then the Russians have news for you.

The Kremlin already controls all the channels of Russian domestic television. Now, it will be beaming "Russia Today" all around the world to go after the international audience — to repair a national image tarnished by war, corruption and assaults on democracy.

"We hope that we can win people by what we're showing," says Margarita Simonyan, the channel's editor in chief, "by interesting documentaries, interesting stories, by some new information about the interesting country that Russia actually is."

Interesting stories like the Russian art scene reported by John Kluver, one of the few Americans working for "Russia Today." A former CNN cameraman-turned-correspondent, he's still trying to learn the ropes.

And he has no illusions about his employer.

"When I talk to friends and they say, 'Hey John, what are you doing there? What's with the new project?' I usually describe it in English or in Russian as a propaganda tool for the Russian government," he says.

After working in Russia on-and-off for the last decade, Kluver says he jumped at the chance to show "the positive side of Russia. I see a lot of positive things here and I always have," he explains.

The station debuted on Saturday after weeks of "technical rehearsals," when it went through all the motions of producing news but did not actually go out on the air. But in what must be a major embarrassment, it had to halt broadcasting Monday due to technical difficulties.

The channel said that hackers had tried to break into its computer system, forcing the station to shut down temporarily.

Critics point out that with or without "Russia Today," there's plenty of bad news about Russia coming out in the Russian and Western media — bad news the Kremlin would like to play down, like the ongoing war in Chechnya, or the crackdown on the free press.

And that's the sort of criticism the Russian government hopes to deflect with "Russia Today," explains Mikhail Fedotov, the former Russian press minister.

"The Kremlin's inside advisors believe professional propaganda might form the splendid and shiny image of modern Russia, without Chechen war, without Khodorkovsky's case (oil tycoon arrested on fraud and tax evasion charges), without corruption," says Fedotov, now the secretary of the Russian Union of Journalists.

The new channel may remind people of Soviet television, where reports were designed to put a shiny veneer on the hardships of life.

Although the government is financing the station, "Russia Today's" young staff claims its coverage of Russia will be fair and balanced, not simply propaganda.

Editor in chief Simonyan, 25, was hand picked to head the new channel after covering the Kremlin for state-owned Rossiya television.

"I don't feel that my job is to improve the image of Russia," she says. "You know, improvement is not really an objective thing. I think my job is to bring the western image of Russia closer to what Russia really is. Because right now in many cases, this isn't what's going on."

Simonyan also says that the Kremlin will not dictate what "Russia Today" can or can't say. "Censorship by government in this country is prohibited by constitution," she explains. "Like in yours."

The Kremlin's already spent at least $30 million to launch "Russia Today," and will need to spend millions more to keep it on the air.

But there's one thing it can't buy — viewers. And with the station available only by satellite, not many Americans may tune in.

"I think there will be people who will want to watch," says "Russia Today" correspondent Kluver. "I would want to watch if I were back in the United States."

Unless people do tune in, it will be "Russia Today," gone tomorrow.